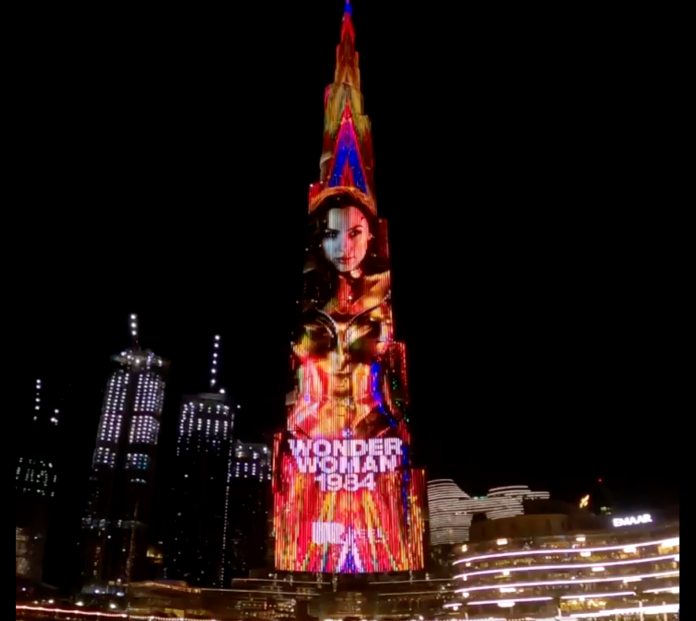 After Shah Rukh Khan appeared on the world’s tallest tower on his Birthday in November, Gal Gadot flew to new heights this December as she dazzled on Dubai’s Burj Khalifa as Wonder Woman ahead of the film’s premier.

Hollywood actress Gal Gadot illuminated Dubai’s skyline as she featured on the Burj Khalifa as her character from her latest superhero film, Wonder Woman 1984.

The actress, who is preparing for the big-budgeted theatrical release of her film Wonder Woman 1984 was ecstatic to see her movie poster and a clip from the film, light up with world’s tallest tower.

Gadot reacted to the grand display on social media and shared a clip of the irridescent promotion which shows the superhero soaring through the sky followed by the maxim ‘BELIVE IN WONDER’. She tweeted: “This is unreal! WW84 covering the Burj Khalifa tower in Dubai.”

This is unreal! WW84 covering the Burj Khalifa tower in Dubai ✨ pic.twitter.com/Ygjg2DvzHW

Gadot, who is one of the first female stars to feature on the tower spoke to Arab News ahead of her appearance on the Burj Khalifa about the special occasion.

“I’m so excited! Please take a photo and send it. I saw the model of what it should be looking like and it’s insane. I’m so, so honored,” Gadot told Arab News.

Gadot also expressed her gratitude to the people of Dubai for giving her the chance to appear on the epic edifice, with wishes to visit the UAE as soon as she’s able.

“I would love to [visit Dubai] and I wish all of you guys happy holidays and I wish you all health and happiness,” said Gadot.

Gadot also stressed the cultural significance of the character — a female role model who projects both strength and moral courage for young girls across the world. Having a superhero like Wonder Woman projected onto the Burj Khalifa, for example, lets young girls looking up at the image know that there is no limit to what they can achieve.

She added: “I realised the power of these movies. I’m a big believer that when you see it, you think you can be it, and then you become it. I didn’t have the opportunity to see all of these strong female characters (growing up). Now I’m seeing the way that it affects my daughters, and also boys and men, and all different type of people. It’s so powerful, and it’s so strong, and I feel very grateful that I have the opportunity to be a part of this,” said Gadot.

While Jo Blankernburg’s theme from the initial Wonder Woman 1984 trailer, entitled The Magellan Matrix, accompanied the Burj Khalifa display, the film itself is scored by Academy Award-winning composer Hans Zimmer.

Wonder Woman 1984 released in the UK on Wednesday 16th December, but cinemas will only be open for people living in tier one or tier two areas.