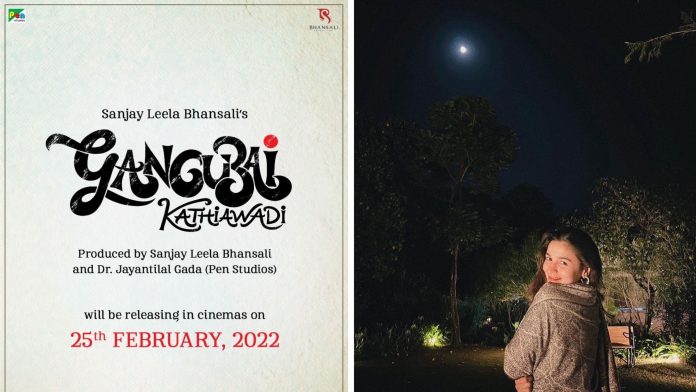 Produced by Sanjay Leela Bhansali and Dr. Jayantilal Gada (Pen Studios), the film is all set to release theatrically on 25th February, 2022.

Gangubai Kathiawadi is based on the life of a sex worker in Mumbai’s Kamathipura, who was pushed into prostitution at an early age. The sex worker later becomes the head of a brothel and a political leader of Kamathipura.

On 28 January, Bhatt took to Instagram to announce the auspicious news with a picture of herself standing before the moon as a good omen. She captioned the posts, “Dekho chand aaya … chand nazar aaya Gangu bhi aa rahi hain .. 25th February Ko.” (Look the moon has come… the moon has come. Gangu is also coming.. on 25th Feb.)

In June last year when the film finally wrapped, Bhatt penned a note of gratitude to the cast and crew for their dedication to the film through the pandemic. Alongside a picture of herself with Bhansali in front of a poster for the film, she captioned the post: “We started shooting Gangubai on the 8th of December 2019 .. and we wrapped the film now 2 years later!

“This film and set has been through two lockdowns.. two cyclones.. director and actor getting covid during the making!!! the troubles the set has faced is another film all together!

“But through all that and more.. what I take away is the gigantic life changing experience!
Being directed by sir has been a dream all my life, but I don’t think anything would have prepared me for the journey I was on for these two years.. I walk out of this set a diff person today! I love you sir! Thank you for being you .. there is truly NO ONE like you 🪄✨

“When a film ends a part of you ends with it! Today I’ve lost a part of me.. Gangu I love you! You will be missed♥️

She concluded, “P.S – special mention to my crew – my family and friends for these two years! without you nothing would have been possible! Love you guys!!!”

Gangubai Kathiawadi will release in cinemas on 25 February, 2022.