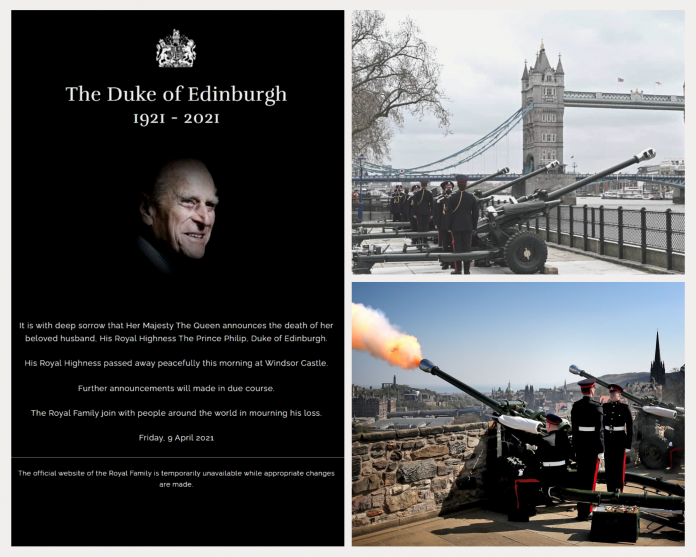 Gun salutes will be held across the UK in tribute to Prince Philip who has died at age 99 at Windsor Castle.

To mark the death of Prince Philip, gun salutes will take place across the UK in Gibraltar and at sea, in tribute to the Duke of Edinburgh.

The duke was the longest-serving royal consort in British history and was at Queen Elizabeth’s side for seven decades of her reign.

Saluting batteries will fire 41 rounds at one round every minute from midday in cities including London, Edinburgh, Cardiff and Belfast, as well as Gibraltar and from Royal Navy warships, the Ministry of Defence said.

Royal Navy ships at sea, including HMS Diamond and HMS Montrose, will also fire the salute in honour of the duke, who served as a naval officer during World War Two and held the office of Lord High Admiral.

Gun salutes have been fired to mark significant national events, including the Queen’s Coronation and the deaths of Queen Victoria and Winston Churchill, since as early as at least the 18th century.

The salutes will be broadcast online and on TV, and the public are encouraged to observe them from home.

Prince Philip died peacefully in his sleep on Friday morning at Windsor Castle. He would have celebrated his 100th birthday in June.

His children paid tribute to him as the “rock” in the Queen and their family’s lives.

A statement issued by Buckingham Palace just after midday on Friday spoke of the Queen’s “deep sorrow” following his death at Windsor Castle on the morning.

“It is with deep sorrow that Her Majesty The Queen announces the death of her beloved husband,” the Palace said.

The breaking news was announced across social media in the wake of Prince Philip’s death when the palace released a public statement.

It is understood that the Prince of Wales travelled from his home in Gloucestershire to visit his mother at Windsor Castle on Friday afternoon.

A ceremonial royal funeral is to be held for the Duke of Edinburgh, rather than a state one and will not lie in state.