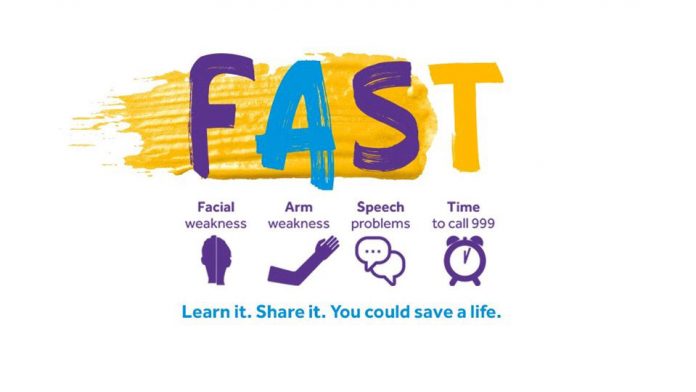 “If you act fast, then there is more chance of a good recovery,” is the prevailing message across the relaunched campaign that aims to raise awareness about stroke emergencies.

There are more than 100,000 incidents of stroke each year in the UK and it is a leading cause of death and disability in the UK. A stroke is a medical emergency and anyone experiencing symptoms should seek urgent help. Early treatment not only saves lives but results in a greater chance of a better recovery, as well as a likely reduction in permanent disability from stroke.

Rajnish Kashyup, General Secretary/Director Kashyap from Hindu Council UK, said: “We are pleased to be working with Public Health England to increase greater awareness of Stroke with Hindu Communities. Through our member organisations we will reach over 350 Hindu Temples across UK”.

Kirit Mistry, Chair and Founder of South Asian Health Action a patient, carer and community led charity said: “We are pleased to be working with Public Health England to engage, educate and empower south Asian communities of the key signs of Stroke to help raise more awareness”.

Rohit Sagoo, Founder of British Sikh Nurses said: “Hypertension and diabetes mellitus are the two main risk factors for strokes in the Punjabi community, so we’re pleased to be working with Public Health England to raise awareness of Stroke and spreading the emergency message one needs to be aware of if a stroke occurs”.

Dr Rubina Ahmed, Executive Director at the Stroke Association, said: “We know that if you’re of South Asian descent, you’re more likely to have a stroke, and you’re more likely to have one younger. That’s why it’s so important to know the FAST test which will prepare you and your family to act quickly and potentially save a life if you ever notice any single one of the signs.”

Think and act F.A.S.T. The signs of stroke are:

Face – has their face fallen on one side? Can they smile?

Arms – can they raise both their arms and keep them there?

Speech – is their speech slurred?

Two stroke survivors share their experiences and encourage others to recognise the signs to save lives. Pratima Gohil was up late preparing for her granddaughter’s birthday when she had a stroke.

“I took some things out of the fridge and put them on the worktop and that was the moment I felt a sudden pain at the back of my neck. I tried to grab the work top, but my hands kept slipping,” the 54-year-old, who has been supported by South Asian Health Action, said.

Pratima experienced paralysis down her left side, blurred vision, slurred speech and wasn’t able to use her hands properly. As she was downstairs alone, she was unable to call for anyone and it wasn’t until her husband found her in the morning that 999 was called and she was taken to hospital.

The former bank clerk who was fortunate to make a full recovery knows how important is to seek medical help fast.

“It is better to get help straight away so that you have the best chances of a good recovery,” Pratima said.

Because her father had a stroke and she had read about it, Pratima knew the signs, however there are still so many people who don’t know what to look out for.

When Tarun Dabhi, a former Post Office worker had a stroke he didn’t know what was happening. His face had dropped on one side and he began to slur his words, two key signs of stroke.

“I did not realise I was having a stroke as I did not know much about the symptoms of stroke,” Tarun, who has received support from the Hindu Council UK, said.

His wife initially believed he was having a reaction to medication he was taking but soon realised something wasn’t right. She called her brother, who is a pharmacist, who urged her to call 999.

That phone call meant Tarun was able to get treatment quickly and he has since made a good recovery. He now pays even more attention to his health.

“I wish I was more aware of the symptoms,” Tarun said. “If you act fast and get help straight away then there is more chance of good recovery.”

Some other signs of stroke or mini stroke can include:

For information on stroke go to https://www.nhs.uk/conditions/stroke