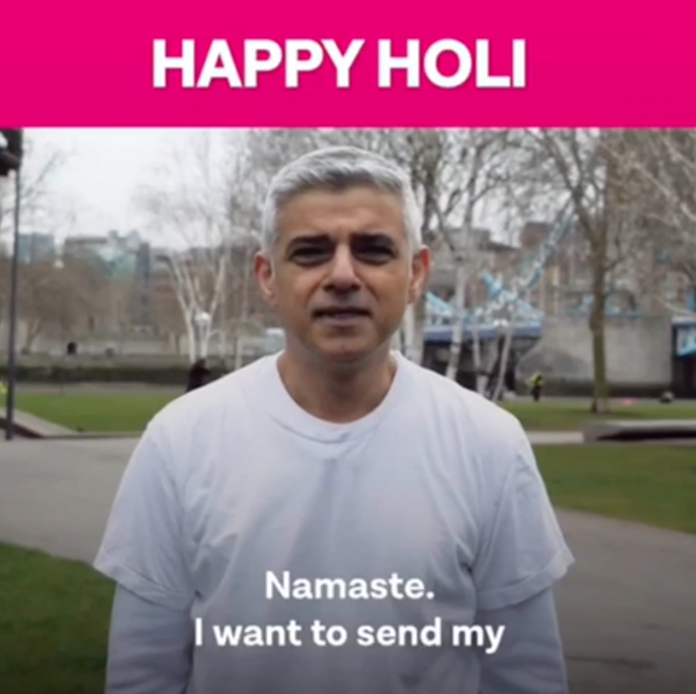 The Mayor of London, Sadiq Khan sends his best wishes to those celebrating Holi in a special video message, for the two-day Hindu festival of colour that marks the beginning of spring.

The Mayor of London, Sadiq Khan has delivered a video message to Hindus across London, and everyone around the world celebrating Holi this year.

In his video address, Mr Khan highlighted how Holi is a “celebration of good over evil” and “heralds the arrival of spring”.

Mr Khan went on to acknowledge that this year “celebrations will be different,” and added “sadly it’s not possible to come together with family and friends.”

But to spread positivity, he emphasised how Holi symbolises “new hope.”

Before the Mayor of London concluded his message, he was quickly met with a colourful surprise.

What is Holi?
Holi or, the ‘festival of colours’ is a Hindu festival that celebrates spring, love, and new life.

Some families hold religious ceremonies, but for many Holi is more a time for fun and is celebrated all around the world. It’s a colourful festival, with dancing, singing and throwing of powder paint and coloured water.

It also marks the beginning of spring after a long winter, symbolic of the triumph of good over evil.

Why is it celebrated?

According to Time, there are varying accounts of Holi’s origin mentioned in several works of ancient Indian literature. According to one popular version of the story, an evil king became so powerful that he forced his subjects to worship him as their god. But to the king’s ire, his son Prahlada continued to be an ardent devotee of the Hindu deity Lord Vishnu.

The angry king plotted with his sister, Holika, to kill his son. Holika, who was immune to fire, tricked Prahlada to sit in a pyre with her. When the pyre was lit, the boy’s devotion to Lord Vishnu helped him walk away unscathed while Holika, from whom the festival derives its name, was burned to death despite her immunity.

What do the Holi colours mean?

It is believed the Holi colours came from Krishna mischievously throwing coloured water over his milkmaids when he was a boy. This developed into the practical jokes and games of Holi and remains integral part of the celebration.

BritAsia TV would also like to wish those celebrating a very Happy Holi.