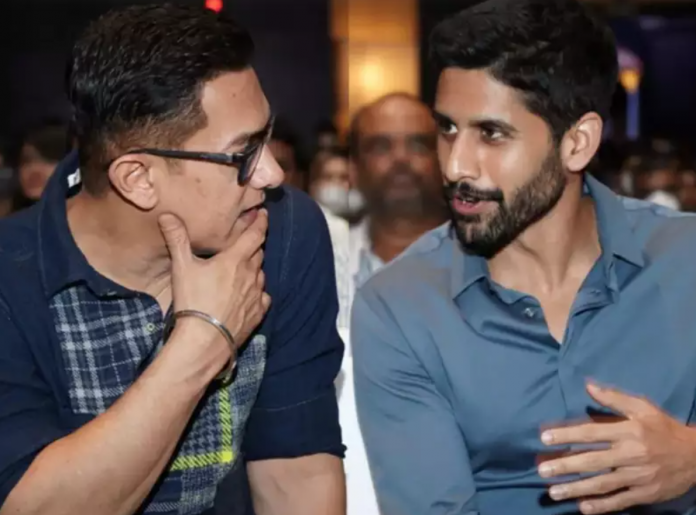 Akkineni Naga Chaitanya’s Bollywood debut ‘Laal Singh Chaddha’ starring Aamir Khan in the lead role is all set to hit the theatres on August 11th. Sharing about Naga Chaitanya’s character in the film, named Bala, the filmmakers released a video in which Naga Chaitanya along with the film’s cast and crew spoke about his character Balaraju Bodi aka Bala. Chiatu plays the friend of Aamir Khan in the movie when the latter is serving in the Indian army. In the video, Chaitu said after referring to many names, the film team finalised the name, Bala Raju. He added that he is happy with that name because his character’s name Balaraju in the film is an ode to his grandfather Akkineni Nageswara Rao’s 1948 film by the same name.

Naga Chaitanya shared that his moustache looks in the film stay more attractive. He added that Bala has a distinguished look due to a protruding lower jawline. Also, he said he felt very emotional while concluding the shooting for the film as he travelled with an excellent team for almost seven months.

Talking about Chaitu, Aamir said, ”I felt such comfort as a producer working with Chay. He’s a team player. As an actor, he’s so on the ball. He drowns himself in the shot completely”. With Chaitu’s childhood pictures on the screen, Aamir praised the actor’s parents for raising him with such discipline. On the other hand, Advait Chandan, the Director of the film said, ” I have worked with many Hindi-speaking actors. But Chaitu being a non-Hindi-speaking actor comes more thorough with his dialogues”. Also, Tarannum Kaur, the make-up designer, complimented Chaitu as a very sweet, patient and calm actor she had seen.