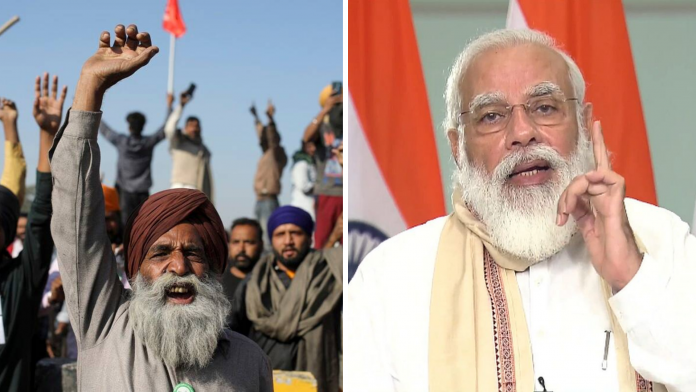 Prime Minister Narendra Modi has announced that his government will repeal the three contentious agricultural laws.

PM Modi also requested protesting farmers to return to their fields and homes.

Addressing the nation on the occasion of Gurpurab, PM Modi said the three laws will be repealed in the winter session of Parliament starting later this month, according to Economic Times India.

“The three laws were in the benefit of farmers but we could not convince a section of them despite our best efforts”, the PM said, adding that he was not laying the blame for this on anyone on an auspicious day.

He said the three laws, against which tens of thousands of farmers have been holding strong protests for more than a year, were brought to empower farmers, especially the small farmers.

The decision comes just ahead of state polls in Punjab and Uttar Pradesh.

“There may have been some shortcoming in our efforts due to which we could not explain the truth, which is as clear as the light of the diya, to some of our farmer brothers,” Modi said.

Going forward, because the three farms bills have already been lawfully passed, the government will have to formally bring in three new bills to repeal the old ones, and get them passed in both Houses.

The outlet also reports on Friday, Congress president Sonia Gandhi said “after almost 12 months of Gandhian agitation” the repeal of three farm laws is a “victory of the will of 62 crore farmers and sacrifices of more than 700 farmers who laid their lives for this struggle”, and hoped that the BJP government would have drawn some lessons for the future.