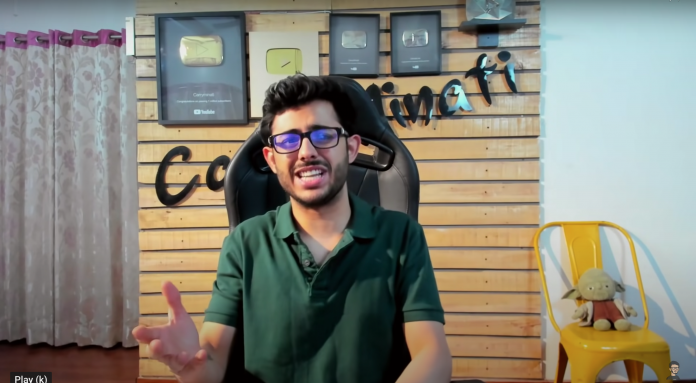 The YouTuber, has announced he will be making his big-screen debut in the upcoming Bollywood film MayDay, sharing the screen with legend Amitabh Bachchan and Ajay Devgn.

The digital sensation, who is famous for his caustic and controversial videos, who has upward 25M subscribers, will play himself in the Ajay Devgn helmer.

Speaking to Hindustani Times, CarryMinati said: “My brother/business head Deepak Char got a call from Kumar Mangat Pathak (Co-Producer at Devgn’s production company) and I have been meaning to align forces with them since a while now.”

“What made it really interesting for me was when I heard I am supposed to play my own character (CarryMinati) & the way it’s going to be shown on screen. I am excited to see how this will unfold,” he revealed.

While his skits profit from immense popularity and engagement, he did not intend on making a big Bollywood debut. He said: “It has never been one of my interests. The main purpose of those skits was to entertain people. Currently I don’t see myself going in that direction but yes I like to experience everything. I agreed to be a part of this film because I had to essay my own character (CarryMinati) and that comes very easily to me.

“I eat, breathe, sleep and live my character every single day. But I’m hoping I get to learn a thing or two about acting from Amitabh Bachchan and Ajay Devgn. They are personalities I look up to and fondly admire.”

Nagar also made it a point to say he doesn’t want to call MayDay his “full-fledged debut”.

“It’s more like an extension of what I do. I dedicate 10 hours in a day for content creation and I’d like to consider that as my passion and calling, acting and music for me is a medium where I can showcase my art to a more varied audience.

“For me personally, my authentic acting innings will happen when I get to the opportunity to dedicate myself wholeheartedly to the art unflinchingly, everything else I do right now I consider as a special appearance,” says Nagar.

Check out the YouTube star on the small screen here, at least before you catch him on the big screen.