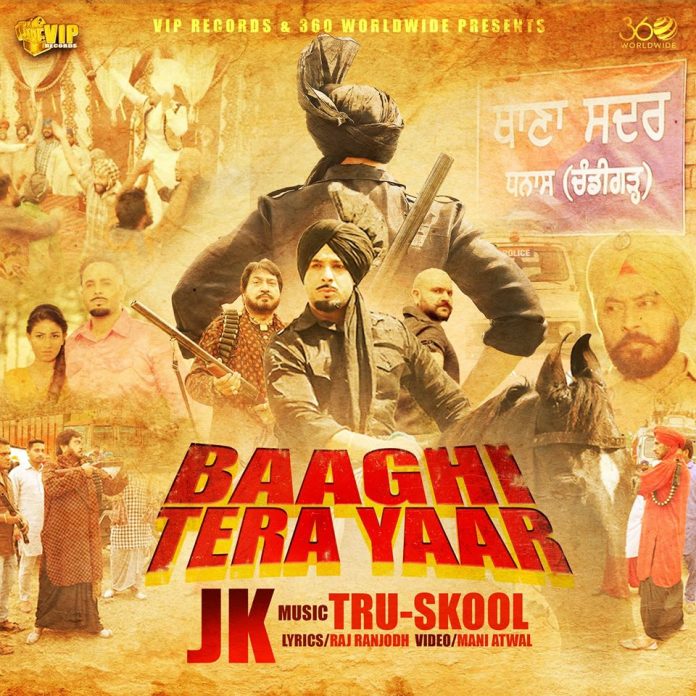 Punjabi singing sensation JK has made his long awaited return to the Bhangra industry in the form of Baaghi Tera Yaar produced by Tru-Skool!

After exploding his way onto the Bhangra scene in 2008 with his debut single Gabru Panjab Da – the vocalist went onto release his debut album of the same name in 2011 – accumulating several accolades and awards for his services. This included being awarded and beating stiff competition for “Best Newcomer” and “Best Album” respectively.

JK’s music has warmed the hearts of Bhangra fans worldwide – with his debut album still deemed as one of the most explosive debut albums of any Panjabi artist ever.

I caught up with JK to discuss his brand new single.

1) How did you, the lyricist and Tru Skool come up with the concept of Baaghi Tera Yaar?

The lyricist for Baaghi Tera Yaar is extremely talented singer/songwriter ‘Raj Ranjodh’. Ustaadji Sukhjit Singh Olk, widely known as Tru-Skool, had been in touch with Ranjodh for a number of years and had kept in regular contact with him. When we commenced collecting lyrics for the album, Ranjodh was naturally our first point of call. We went through over 200 songs with Ranjodh and Baaghi Tera Yaar was one of the songs that we instantly knew HAD to be on the album because it was pure, undiluted and potent. Tru-Skool decided to make the music on this track a throwback to the late 70’s/80’s period of Panjabi Folk when the greats ruled the roost with music from the maestro Charanjit Ahuja – as we felt this is what the song demanded. This song defines everything we are about hence I decided to go with this song as my comeback single signalling the return back into the market.

2) How would you describe the musical flavour of Baaghi Tera Yaar?

The music flavour in Baaghi Tera Yaar is, as touched upon above, a full on throwback to the time when the legendary Kuldeep Manak, Surinder Shinda, Chamkila and some other greats were at the peak of the industry. The way to describe the musical flavour of Baaghi Tera Yaar is Panjab, Panjabiat, Panjabi – it is 100% authentic Panjabi Folk music which is what we grew up with. Tru-Skool, in my opinion, is the greatest music director in the industry (and I’m not just saying this because he is my Ustaad); and I think with his song he truly went into the mind of Charanjit Ahuja and made the music as if he would have done all those years ago. The musical melodies within this song were all composed by Tru-Skool and he also played the Tabla, Dholki, Dhol & Tumbi – in the authentic Panjabi folk way which many people attempt but fall short of the mark. I feel so proud and grateful that this music was created for a song that I sang on. Real folk.

3) The music video is incredibly entertaining. What was it like to work with the director Mani Atwal and who came up with the video concept?

Mani Atwal is a newcomer within the Panjabi music video industry and I have to say that he absolutely nailed it – he transformed our vision onto the screen which is extremely hard to do. The concept of the video was devised by myself – I came up with the storyline and Mani Atwal came up with the goods as he literally turned the ideas into my head into this top quality music video. Working with Mani Atwal was a pleasure as he was extremely professional, proficient and focused and the end result is the video that you see today. Myself and our team are massive fans of the old school Panjabi films such as Putt Jattan De, Badla Jatti Da, Long Da Lishkara, etc and we wanted a music video that reflects the lyrics and the vibe of the song as well as having the old Panjabi film feel and Mani delivered that – 100%.

4) The music video features Surinder Shinda in a cameo role – what was it like working with him?

Surinder Shinda is a legend – in every sense of the world. Since a young age, I have always loved Surinder Shinda firstly as a singer and secondly as an actor as he also featured in some of my favourite Panjabi films. We first collaborated on the single Puth Jattan De when Ustaadji Tru-Skool decided to use me alongside Gurbhej Brar, Kulvinder Johal & of course, Surinder Shinda. It was a dream come true to sing alongside some of my favourite singers and one of my biggest idols. To then have Surinder Shinda Ji feature in a music video to my song was just out of this world. It was a blessing and an honour to have the living legend in our music video and it is a memory I will treasure for life.

5) It has been over five years since the release of your debut album ‘Gabru Panjab Da’ – what has the demand been like for a sophomore album?

The demand, with the grace of Waheguru, has been phenomenal. Of course there has been a massive gap since the debut album as I was busy with family and also performing shows across the UK and the World – and at every show people ask when the album is coming. On Facebook or social media; whenever I post something – I get asked when new music is coming. The fans have supported so much and really shown us a lot of love – we can’t thank you enough. Baaghi Tera Yaar entered the iTunes Chart at Number 1 and in three days, the track has been illegally downloaded over 600,000 times! People have shown massive support on social media.

6) Is there any plans to release a sophomore album and if so, is there an update on whether it is nearing completion?

There will definitely be a follow up album which is currently being prepared as we speak. Tru-Skool, of course, will be doing be music for the album and it is definitely underway. It takes a lot of time, effort and energy to make an album and the hard work has commenced. Once again, Tru-Skool is working extremely hard on the forthcoming album and we will update all of the supporters as and when. Thank you for the bottom of my heart to all family, friends, fans, supporters, media and most importantly my Ustaad and above all, Waheguru for allowing me to do what I loved and always wanted to do as a youngster.

Check out the track above and stay tuned to BritAsia TV for more music, sport, entertainment and fashion updates!