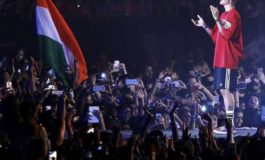 One of India’s most anticipated events of 2017 took place last night, and for many Indian Beliebers, it was the best night of their lives!

The concert took place at DY Patil Stadium, Mumbai. The Canadian-singing sensation sang over 20 songs to a crowd made up of over 45,000 fans! – including several Bollywood stars!

However, one of the most notable moments of his trip happened just after he arrived in India. Justin and his crew took time out of their busy schedule to visit some underprivileged children in Mumbai to hand out over 100 free tickets, after designing a special VIP area within the stadium for them to stand in.  The interaction between Bieber and the children was filmed and posted to social media, you can see the video below:

Despite the majority of fans enjoying the night, some were left with a bitter taste in their mouth for a number of reasons. One of which was the fact that Bieber was, in fact, lip-synching to most of the songs. Another reason for some fans not enjoying the show was the fact that everything within the venue was crazily over-priced! With a single cigarette costing ₹50 and a bottle of water costing ₹150, no wonder fans were upset!

All in all, the concert seemed to be a hit! We think it’s great to see artists recognising India as a place to visit on their world tour and Justin’s influence has already made a positive impact as it was announced earlier this week that Ed Sheeran will be visiting India very soon!

Let us know your thoughts #BritAsiaTV.