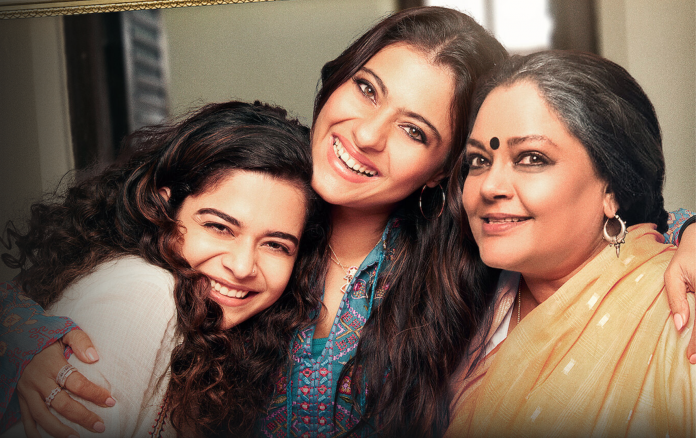 It is produced by Ajay Devgn FFilms, Banijay Group Asia and Alchemy Films and both written and directed by Renuka Shahane.

Starring Kajol, Tanvi Azmi and Mithila Palkar in the leading roles, the film centres on the lives of three women from the same family, who belong to different generations. When her estranged mother falls into a coma, a self-made single mom grapples with regret and resentment while reflecting on their strained relationship. The film will release on 15 January 2021 on Netflix.

On Friday, Netflix released a teaser of its upcoming film Tribhanga. Together with with the video, the streamer also shared a pithy summary of the story when they tweeted: “Family, can’t live with them, definitely can’t live without them. #Tribhanga.” And tagged those involved with the project.

Taking to Twitter, the director expressed his sentiments surrounding the characters in his film and his thanks. He tweeted: “Dear Kajol,Tanvi, Mithila. Or should I say dear Anu, Nayan, Masha, to whom you’ve given your flesh, blood, vulnerability, strength, tears & laughter, making them more than I had imagined. A big thank you @itsKajolD @tanviazmi @mipalkar the heart, core & soul of Tribhanga.”

Set in Mumbai, Tribhanga interweaves a complex tale that bounced back and forth across three generations of the same family – from the late 1980s to the present day. Shahane had earlier described the film as a “heartwarming story-line that looks at the importance of family in everyday lives”.