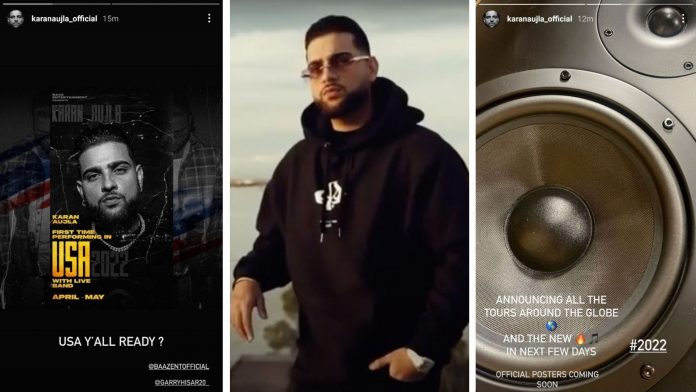 Together with his next single, Karan Aujla has announced dates for his first USA live tour and plans for a global tour in 2022.

Punjabi singer, Karan Aujla took to Instagram Stories on 4 January to announce his upcoming USA tour and plans for a global tour in 2022.

‘Geeta Di Machine’s first-ever USA tour will be accompanied by a live band and the show will be presented by Baaz Entertainment.

According to Aujla’s caption on his first Story post, the USA leg of the Bhangra artist’s global tour will take place between April-May, 2022.

Through a caption in his second post, the Click That B Kickin’ It hitmaker also teased his upcoming track with a flame and musical note emoji, and confirmed “official posters” will be coming soon.

Aujla is best known for his many singles from his early musical career including Adhiya, Don’t Worry and Mexico. In September, 2021 his highly-anticipated debut album, B.T.F.U (BacThafu*UP), entered the international music charts and the singer became India’s Biggest Digital Artist.

The album, featuring music produced by UK’s Tru Skool, released on 15 September across all streaming platforms and immediately ascended the top spot on the Albums Chart worldwide.