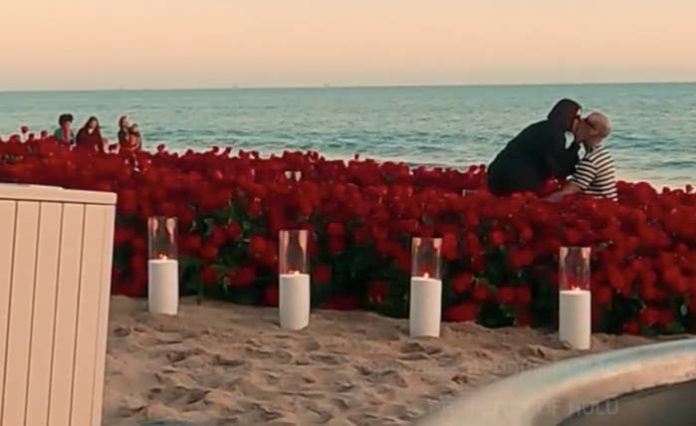 The two stars had been close friends for several years before their relationship turned romantic during lockdown, and she was over the moon when he popped the question.

Her famous family knew about the proposal and were on hand to celebrate when Kourtney and Travis returned from the beach, and it wasn’t long before they were fawning over the all-important ring on social media.

Travis worked with Lorraine Schwartz to design the jewelry, opting for an oval-cut diamond atop a diamond band.

“It’s a flawless, beautifully cut diamond stone,” Lorraine previously told People. “He was really hands-on in the whole making of it. It’s gorgeous and they’re happy.”

Experts estimated that the ring is worth at least $1 million, with the huge diamond believed to be 12 carats.

But it has now been revealed that Kourtney broke the ring by stepping on it just days after the engagement — and she was absolutely devastated.

In this week’s episode of The Kardashians, Kris Jenner visited her oldest daughter at home for a debrief following the proposal.

“Oh my gosh, can you believe you’re engaged!” she exclaimed in the scene, before asking: “Where’s the ring?”

Kourtney, who had her sleeves pulled over her hands, then opened up about the accident, admitting to her mom that she cried for hours and had “a nervous breakdown” after treading on it in her closet.

“I’m covering it because it’s actually getting fixed,” Kourtney explained. “This is probably one of the worst things I’ve ever done in my whole life, by the way.”

“I was sitting on my floor folding sweatshirts and I took the ring off and I put it next to me on the floor thinking it’d be safe right next to me,” she went on. “I had to get something up above in my closet, and when I stepped down I stepped on the ring.”

Kris was unable to hide her shock as she replied: “You broke your engagement ring?”