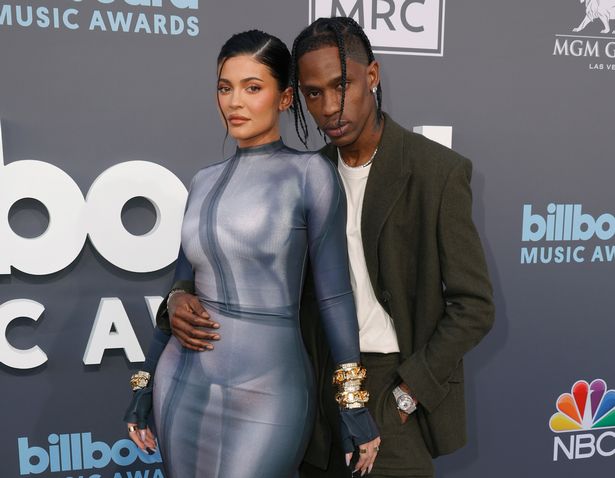 Kylie Jenner appeared to shun her oldest sisters wedding day by going to a music awards show instead while Kourtney Kardashian was swapping vows with Travis Barker.

The 24 year old reality star proudly walked the red carpet at the Billboard music awards on Sunday alongside her on-off lover Travis Scott, 31, with whom she shares two children.

Kylie stunned in silver dress as she attended the event – with the number featuring the silhouette of a woman on the fabric – while her four-year-old daughter walked at her side and Travis looked chic in an olive coloured suit.

While Kylie was beaming as she walked down the red carpet in Las Vegas, her older sister Kourtney was walking down the aisle for her first ever wedding in Santa Barbara.

The 43-year-old swapped vows as she tied-the-knot with Blink 182 star Travis, 46, on Sunday – seemingly with none of her family members in attendance.

Kourtney has never married before, but shares three children with her ex-boyfriend Scott Disick who she dated from 2005 until 2015.

TMZ reported Kourtney and Travis’s wedding on Sunday, revealing: “Kourtney Kardashian is a married woman – she just tied the knot with Travis Barker, and this time, they’re truly man and wife in the eyes of the law.

“The couple said ‘I do’ Sunday in Santa Barbara, where they were spotted in traditional bride and groom wear and exchanging vows on the steps of what appears to be the downtown courthouse there on Anacapa.”

The report explained that it was a relatively low key event with bodyguards and key witnesses in attendance, and not a huge amount of people.