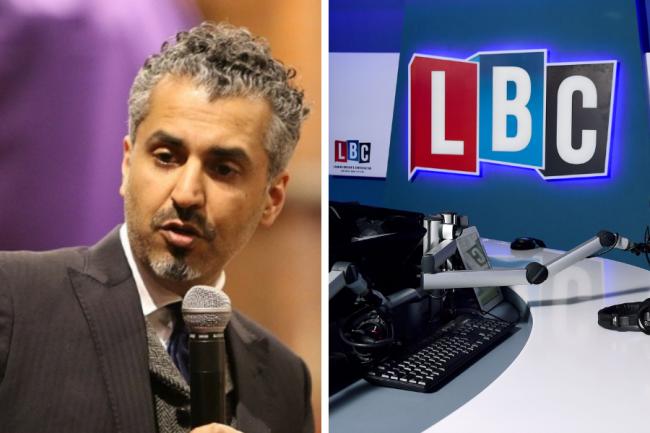 LBC presenter Maajid Nawaz has left LBC “with immediate effect” after pressure mounted both internally and externally over tweets he posted about Covid-19 vaccinations.

Nawaz, who first joined the station in September 2016 and presented on Saturdays and Sundays from 1pm to 4pm, said it was not his decision to leave.

In a statement social media, LBC confirmed the future of Nawaz on the radio station and thanked the presenter for his contributions over the years.

Maajid Nawaz’s contract with LBC is up very shortly and following discussions with him, Maajid will no longer present a show on LBC with immediate effect. We thank Maajid for the contribution he has made to LBC and wish him well.

Nawaz tweeted that he had been scheduled to appear on air on Saturday and that his contract was not due to expire until April. He said: “I did not quit.”

Quoting LBC’s statement, he asked followers to subscribe to his newsletter on Substack — telling them the show was his family’s “only source of income”.

i refuse to go quietly into the night

please become a paid subscriber to my substack newsletter

i’ll post there soon but forgive the basic set up for now, I have a wife & child to support and my show was our family’s only source of income: https://t.co/nfYCw9Fwb4

Press Gazette understands that Nawaz’s tweets in recent months have brought both internal and external pressure on LBC management to take action.

The news of his departure came shortly after he posted a tweet linking news of mandatory vaccinations for over-50s in Italy to “a global palace coup that suspends our rights… by a network of fascists who seek a New World Order”.

That tweet, however, was only one of a long list of statements he has made recently impugning the efficacy of vaccination over “natural immunity”.

Nawaz now appears to have been officially removed from the LBC website’s list of presenters.

The infamous presenter made his name as the founder of anti-extremism think tank Quilliam, which he set up after he himself was radicalised into, and then de-radicalised from, an extremist Islamic group.