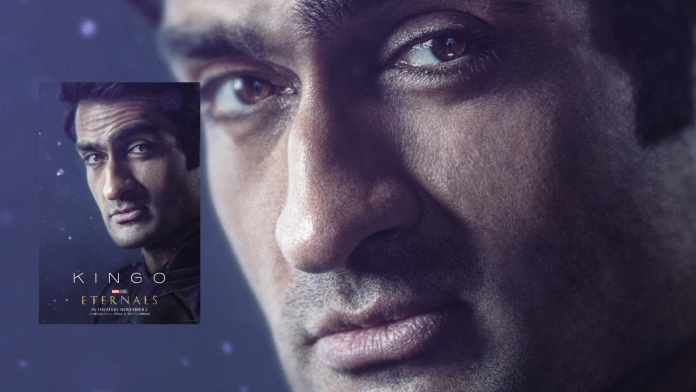 The character posters for the The Eternals were shared this week.

The Eternals, is an upcoming Marvel Studios action-adventure which sees a race of immortal beings with superhuman powers, who have secretly lived on Earth for thousands of years, reunite to battle the evil Deviants.

In the character posters released this week, Kumail Nanjiani, 43, Salma Hayek, 55, and Angelina Jolie, 46, proved to be the big draws as they donned their warrior costumes.

Also seen were Gemma Chan and Richard Madden, among others, for their very own one sheets that featured close-up shots.

In a character explainer, the superheroes are said to be “unlike most Marvel characters” and they are really at the heart of it a “dysfunctional family unit”.

Nanjiani took to Twitter to promote the poster on 11 October:

(Sorry, wanted to see that emoji.)

There is also Lauren Ridloff as the super-fast Makkari, Barry Keoghan as aloof loner Druig, Don Lee as the powerful Gilgamesh, with Kit Harington as Dane Whitman, with Hayek as the wise and spiritual leader Ajak, and Jolie as the fierce warrior Thena.

The film is directed by Chloé Zhao with Kevin Feige and Nate Moore as producers, and Louis D’Esposito, Victoria Alonso and Kevin de la Noy serving as executive producers.

The Eternals is scheduled for release on Friday 5 November, 2021.