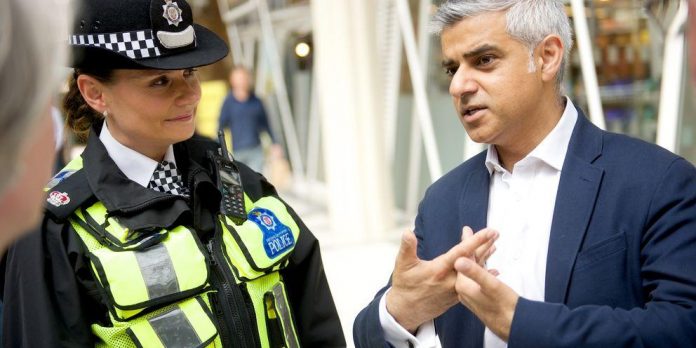 As part of a major race action plan, London mayor Sadiq Khan and the police force have agreed a target that will see 40% of Met Police from ‘BAME’ backgrounds.

In their article, the Guardian writes Britain’s biggest police force “must hire 40% of new recruits from ethnic minority backgrounds, while officers will have to justify stop and search to community panels under new plans designed to quell the race crisis engulfing Scotland Yard.”

The publication has learned details of the new initiative on race and policing outlined by London’s mayor, Sadiq Khan and the Metropolitan police after months of negotiations.

They reported that the Met commissioner, Cressida Dick, is expected to accept that the force is not free of racism or discrimination, and wants to improve, when the race action plan is unveiled on Friday.

The stark revelation comes after mass Black Lives Matter protests over police racism following the killing of George Floyd in the US.

Dick has been “under pressure over a string of controversial incidents, including stop and searches of innocent black people who were handcuffed, leading to claims of racial profiling.”

Official figures show black people are “disproportionately hit by key police powers, tactics and use of force, which the Met denies is due to systemic racism or bias,” reports the Guardian.

New research for Khan finds black people in the capital are nearly six times more likely than white people to be stopped while driving.

The plan will set the Met a target for new recruits, with 40% being from ethnic minority backgrounds by 2022, rather than the 19% target it had been planning.

“In 2019 the Met estimated it would take another 100 years to reach racial parity”, writes the Guardian.

Khan said: “There is still a great amount of work to do to unpick the conscious and unconscious bias and systemic racism that still exists in our public institutions and our society as a whole. It is essential that we listen and respond to the frustrations voiced by Black communities … about the racial and social injustice they see when they interact with our public institutions – from the police service to the education system, the courts, the media and beyond.”

Meanwhile, national police chiefs are working on their own plans for all 43 forces in England and Wales, and the Independent Office for Police Conduct is investigating claims of discrimination in policing.