January 20th marked a historic day as Donald Trump became the 45th president of the United States of America. Among the guests at Trump’s pre-inauguration dinner which included numerous politicians, industrialists and celebrities was none other than Bollywood Singer Mika Singh.

Singh attended the function which was held at the Lincoln memorial and rubbed shoulders with Trump’s daughter businesswoman Ivanka Trump even posing for a selfie with her. Regarding his conversation with Ivanka he said: “It was an honour to meet Ivanka. She is intelligent, beautiful and down-to-earth. Mr Trump is a huge fan of Indian music and Indian community. He has even named his casino Taj.” 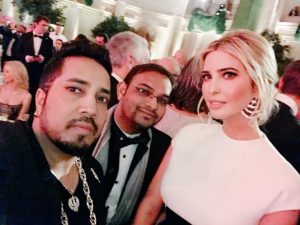 Although his trip to the US was short-lived he remarked: “I feel privileged to have attended the ceremony along with other influential members of the Indian community. It was stimulating to hear the President talk about America’s future.”

What do you think of Trump’s apparent love for Indian culture? Let us know your thoughts. #BritAsiaTV