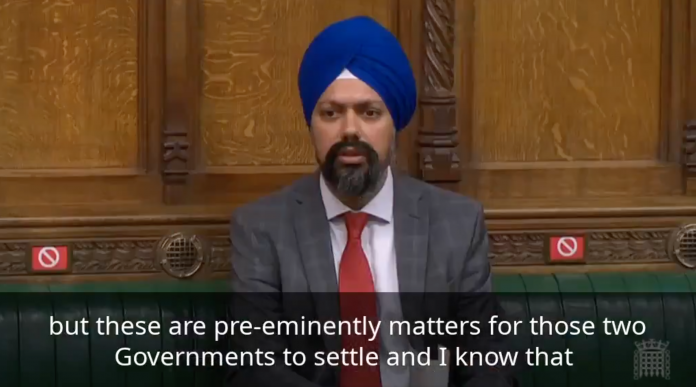 UK Prime Minister Boris Johnson is facing criticism for his response to the farmers’ protests in Dehli, for his remark about the historic India-Pakistan conflict.

PM Boris Johnson was responding to Labour MP Tanmanjeet Singh Dhesi‘s question about the UK government’s stance on the farmers’ protests in India when he responded with a comment that involved Pakistan.

As a result, Johnson has been labelled “absolutely clueless”, reports the Guardian, after a parliamentary blunder, where he appeared to misinterpret the farmers’ protests that have closed down swathes of India, with the ongoing, historic conflict between India and Pakistan.

Dhesi addressed Johnson during PMQs, seeking a comment on the demonstrations in India, which have seen tens of thousands of farmers camped out around Delhi in protest of the Farm Bills that farmers say will destroy their livelihoods.

“Many constituents, especially those emanating from Punjab and other parts of India, and I were horrified to see footage of water cannons, teargas and brute force being used against peacefully protesting farmers,” said Dhesi.

Addressing Johnson, Dhesi asked: “So, will the prime minister convey to the Indian prime minister our heartfelt anxieties, our hopes for a speedy resolution to the current deadlock, and does he agree that everyone has a fundamental right to peaceful protest?”

However, Johnson appeared none the wiser concerning the protests in which Dhesi was referring and responded: “Our view is that of course we have serious concerns about what is happening between India and Pakistan but these are pre-eminently matters for those two governments to settle.”

Dhesi, who has been vocal supporter of the farmers and initiated a letter pledging support for the protests signed by 35 other MPs, looked perplexed at Johnson’s response. He later took to Twitter to criticise the prime minister.

He tweeted: “Many were horrified to see water cannon, tear gas and brute force being used against farmers peacefully protesting in India about #FarmersBill2020. Everyone has the fundamental right to protest peacefully. But it might help if our PM actually knew what he was talking about!” and shared the response from the Prime Minister from the chamber.

Many were horrified to see water cannon, tear gas and brute force being used against farmers peacefully protesting in India about #FarmersBill2020.

Everyone has the fundamental right to protest peacefully.

But it might help if our PM actually knew what he was talking about! pic.twitter.com/EvqGHMhW0Y

Johnson’s response prompted both mirth and anger in India, with many frustrated that Pakistan had been mentioned when they have no role in the protests.