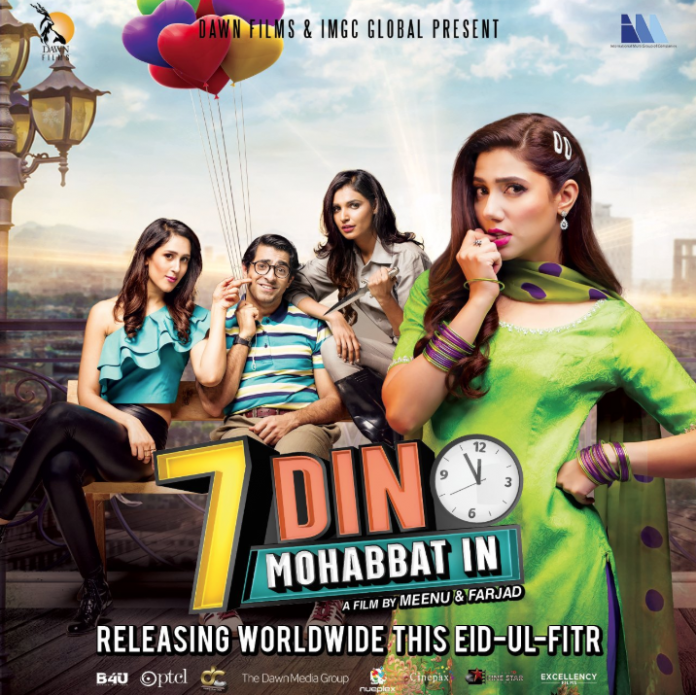 ‘7 Din Mohabbat In’ is the latest Pakistani romantic comedy movie that is due to be released in time for Eil-Al-Fitr.

The movie’s story line follows a young guy who is finding it difficult to find love in Karachi, and starts his quest for true love, but he must battle a few obstacles to find “the real one”.

Mahira Khan, who made her Bollywood debut alongside Shah Rukh Khan last year. and Sheheryar Munawar play lead roles in the upcoming movie, where Sheheryar is love-starved and Mahira is his love coach.

The movie is anticipated to be the ‘romantic comedy of 2018’, and in the trailer we see a fusion of eastern and western, which hints at a complicated love story revolving around the four characters – Tipu, Neeli, Princess Sonu and Ghazala.

We also see the classic rain Bollywood scene from ‘Kuch Kuch Hota Hai’ recreated by the lead characters in the movie, and see Mahira playing a more comic role rather than serious ones that she played eaelier in films such as ‘Verna’ and ‘Bin Roye’

The rom-com has been directed by Meenu Gaur and Farjad Nabi, where they explore the highs and lows of finding unconditional love. Check out the trailer for the movie below and catch it in cinemas on Eid ul Fitr.