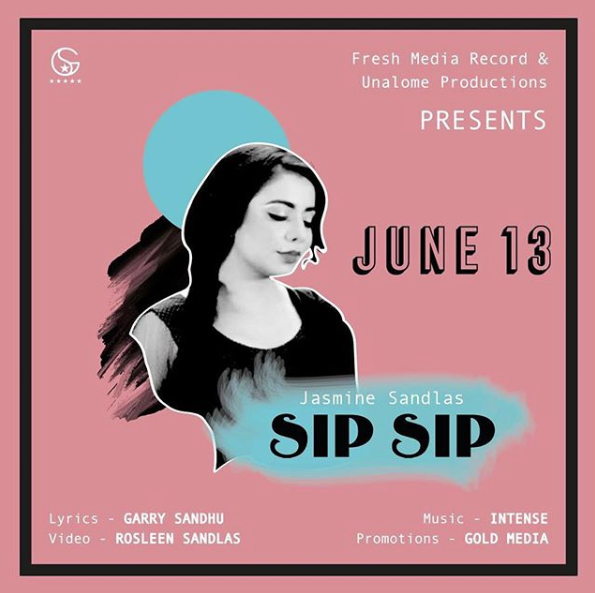 ‘Sip Sip’ is different to Jasmine’s previous release ‘Veera’ and ‘Illegal Weapon’, which were both really catchy tracks but in her latest song she’s gone for Bhangra beats that will be a party starter.

The Gulabi Queen has been releasing hit after hit with Punjabi singer Garry Sandhu such as ‘Laddu’ and ‘Illegal Weapon’, and they have again united for the latest release. Garry doesn’t sing in the new song, but he does feature in the music video, which has been directed by Jasmine’s sister Rosleen Sandlas.

We see Sandlas in a traditional Punjabi suit accompanied by Bhangra backing dancers, and in other shots we see a much-laid back Jasmine and shots of her performing the new Punjabi track in concerts, where we see her fans dancing along.

The video is full of fun, entertainment and colour, where we get to see all sides of the Punjabi singer. and see Sandlas singing along to the lyrics that have been written by Garry Sandhu, and dancing to the music, which has produced done by Intense.

The track has already reached over a million views on YouTube, and we’re sure this will be another successful song from the Gulabi Queen.

Jasmine Sandlas is due to release her third album soon, and we can’t wait to see what she has in store for us.

Sip Sip drops on June 13th. Patt lai geya on July 1st. Whiskey di botal on July 24th. Bagavat. Zikar. And so on and so forth 😊

Check out ‘Sip Sip’ by Jasmine Sandlas below.