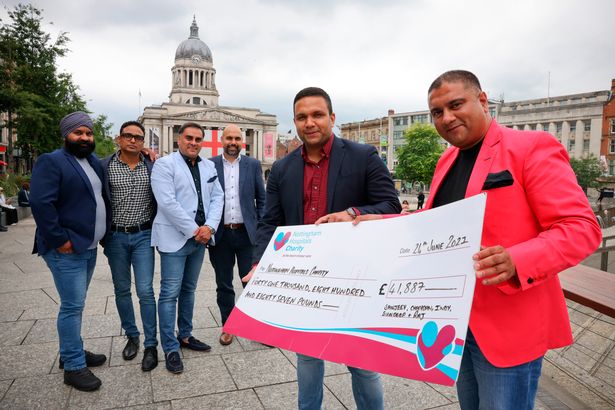 Sanjeev Sharma, who spent two weeks in an induced coma after contracting Covid-19 has raised nearly £42,000 for the hospital that saved his life.

Bramcote, Nottingham based barrister and dad-of-two Sanjeev Sharma, spent a total of 28 days in hospital and was treated on a ventilator.

Since returning to work, he told the publication how he and a group of brothers and close friends raised thousands for Nottingham Hospitals Charity by climbing Mount Snowdon.

Sharma had no underlying health conditions and his diagnosis came after he returned home from London, where he’d been working on a crown court case the week before the first national lockdown.

He felt hot and cold and he said his temperature got worse and his breathing became laboured.

Having followed the Government’s advice to self-isolate for a week, he was taken to A&E at the Queen’s Medical Centre on March 25 last year.

He was told he had “severe Covid” and Mr Sharma was transferred to the respiratory ward at the City Hospital.

“I remember a doctor saying to me whilst I was on the ward at City Hospital I am ‘really, really quite poorly'”, said Nottingham Post, quoting Mr Sharma.

“My prognosis was really 50-50, their only option they had was the ventilation. I had no family with me. They put me into an induced coma and put me on a ventilation machine which obviously assists with your breathing.”

“I was in an induced coma for the best part of 14 days.”His family were kept updated by the nurses and doctors.” By the grace of God 14 days later I woke up,” said Mr Sharma.

He was discharged on 21 April last year and he had to learn to walk again. He went back to work full-time in the August and Mr Sharma spoke about the lasting impact the virus has had.