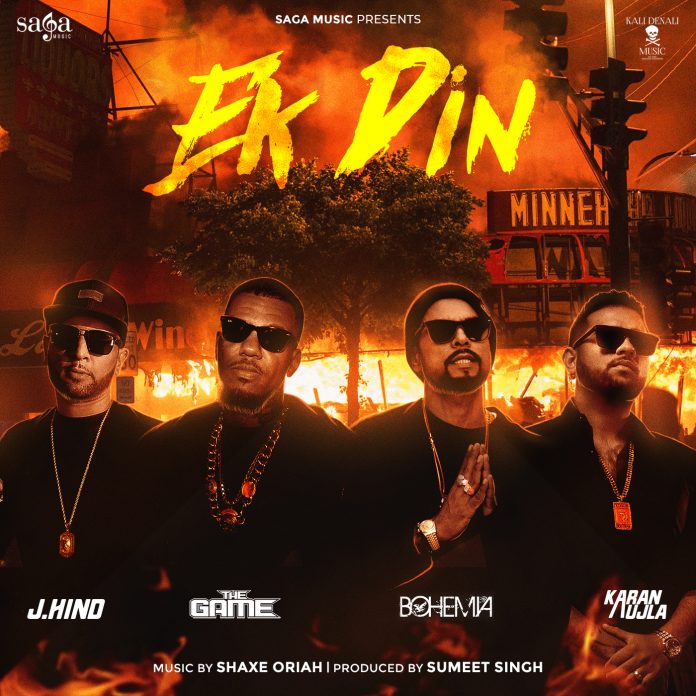 Ek Din is performed by Bohemia, featuring Karan Aujla, J.Hind and The Game (in order of appearance). The lyrics are penned by the afore four, the music is produced by Shaxe Oriah and the video is directed by Touch Blevins & Roger Artola.

The incendiary sentiment of the song encapsulates the hardship and atrocities that marginalised communities continue to face in their daily lives with a plea for help but also a hope for freedom. The video poignantly reminisces stark scenes captured from this year’s protests that swept all across America and more recently northern regions of India with the farmers’ protests.

Each rapper brings to the song their own ethnic flavour and irrespective of language, the message remains universal — in that one day “freedom from this pain is possible” and reminds us that regardless of the obstacles we are facing across the globe, we must remind ourselves that victory too, is possible.

The sentiment is simplified in his opening line which Bohemia raps “ek din gamah ton azaadiyan ne mumkin.” He also tweeted the bar when he posted a preview of the single’s artwork at the beginning of December as a teaser.

Expressing his appreciation for the reception of the rap song released earlier this week, Bohemia tweeted: “Thank you all for all the luv on #Ekdin” and shared a photo of the trio that feature on the track (Aujla absent).

Thank you all for all the luv on #Ekdin ❤️ pic.twitter.com/pJcH29go1X

The official music video for Ek Din is out now and available to watch and download here: