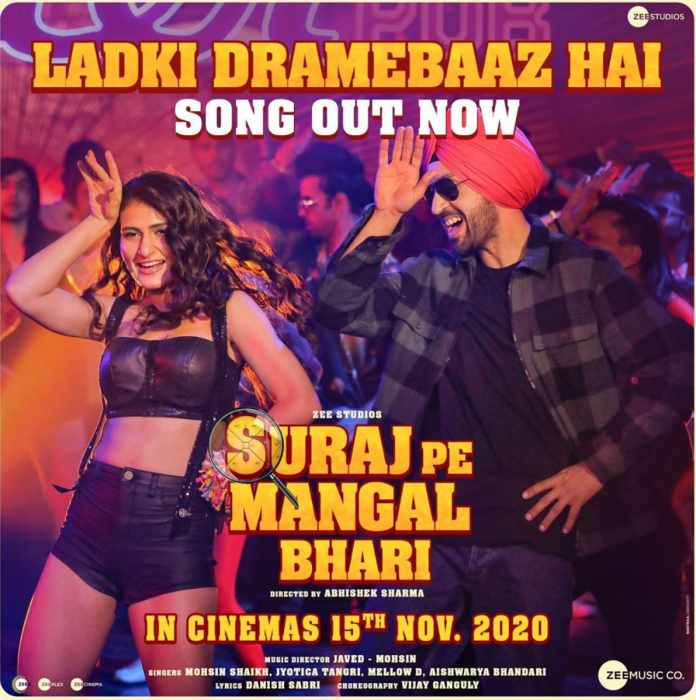 ZEE Music Company has released the latest song from the upcoming film Suraj Pe Mangal Bhari ahead of its release this Diwali weekend.

The new song features the pair who are seen dancing in full verve in this vivacious number.

The song is composed by Javed – Mohsin, sang by Mohsin Shaikh, Jyotica Tangri, Mellow D, Aishwarya Bhandari and the lyrics are penned by Danish Sabri with rap by Mellow D.

Taking to Twitter on its release, Bajpayee tweeted his support for the song that features in the film. He tweeted: “Sanskaari bhi, sassy bhi. Full-on dhamaal hai. Get ready for her, yeh #LadkiDramebaazHai Song out now!: http://bit.ly/LadkiDramebaazHai… #SurajPeMangalBhari releasing this Diwali!” In cinemas on 15th November @diljitdosanjh
#FatimaSanaShaikh #AbhishekSharma @ZeeStudios_ @annukapoor_

Check out the song in the official music video right here:

Suraj Pe Mangal Bhari is releasing in theatres this Diwali weekend on 15 November 2020.

Directed by Abhishek Sharma, Suraj Pe Mangal Bhari stars Manoj Bajpayee, Diljit Dosanjh and Fatima Sana Shaikh. It centres on a Mumbai boy Suraj whose bride hunt is thwarted by a detective named Mangal, who exposes the “ills” of prospective grooms to the girls and their families. When Suraj gets to know about Mangal’s interference, he decides to use his sister to get even with him.