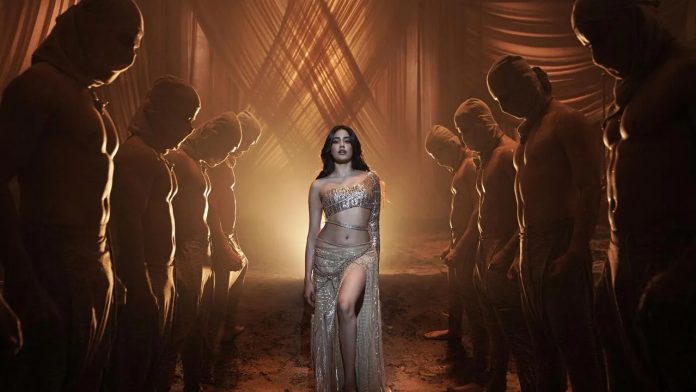 The makers of Roohi have released the next music video from the upcoming film, with Nadiyon Paar, shining a spotlight on lead actor Jahnvi Kapoor.

The latest song to be released from the film, revives one of most sensational songs from the west but with a desi twist. Nadiyon Paar is a toe-tapping rendition of Let the Music Play, the iconic English track by Shamur that still reverberates today.

In a dazzling display of her serpentine moves, Kapoor shines in the latest version of the song. Dressed in shimmering gold, the actor looks nothing less than glamorous as she grooves to the hip-swaying song.

In a statement, composers Sachin- Jigar said, “Let the Music Play is a cult tune, and the opportunity to present this song to a new generation was irresistible! *Nadiyon Paar* absorbs the elements that made the original so special and sprinkles a bit of Roohi’s magic, to bring that extra tadka.”

In addition to composing the track, Sachin – Jigar also helm the mic for the updated version, singing it along with Shamur, Rashmeet Kaur and IP Singh. The lyrics are penned by Shamur, IP Singh and Jigar Saraiya.

While retaining the iconic essence of the original tune, the Bollywood makeover still offers a freshness for the next generation.