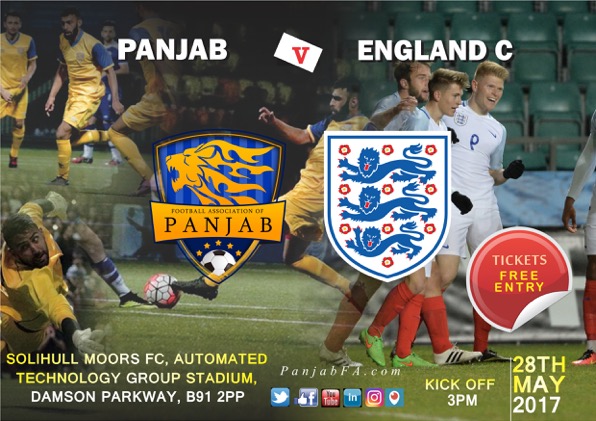 Panjab FA will go head-to-head with England’s C team for a landmark friendly on May 28th at The Automated Technology Group Stadium, Solihull Moors FC.

The FREE event will allow fans to witness a historic landmark in Football and the Asian community- celebrating inclusion, diversity and player opportunity for Asian football as a whole.

Panjab FA is a non-league football team made up of players from Indian and Pakistani decent, the team aims to showcase the very best of British Asian footballing talent.

Chairman of Panjab FA, Harpreet Singh said in a statement, “After several months of discussions, the moment has come to celebrate a grand fixture for Panjab against England C.”

“From the very first day, the objective of Panjab FA was to provide the canvas for the talents of the Panjabi community, and British Asian footballers to progress through the football pyramid.”

“It’s also a proud moment for me, as a Panjabi, to promote the culture, heritage and identity. I want to take this opportunity to reach out to the whole Panjabi and the wider Asian community; the media and public figures to come together and celebrate this new evolution in football – and our love for Panjab, it’s history, and the Panjabi identity.”

Laurence Jones, The FA’s Head of Leagues and Clubs also went on to add, “Enabling talented players from every diverse community to play in a match like this just one of the ways we hope to make football truly a game for all.  Working with Solihull Moors FC and Panjab FA we hope this is a well competed game, a family friendly spectacle and something fans will remember for a long time.”

CEO of BritAsia TV, Tony Shergill says, “Its great to see British Asians being given the opportunity to showcase their talents against a high-profile team such as England C. We hope that the event will inspire and provide hope to young asian people who dream of a career in Football.”

The event will also be filmed as a part of an upcoming BBC documentary which focuses on the rise of Panjab FA.

The match is set to be a great day out for all the family, you can get your tickets online at: https://www.eventbrite.co.uk/e/panjab-fa-vs-england-c-tickets-32503980280?aff=eac2