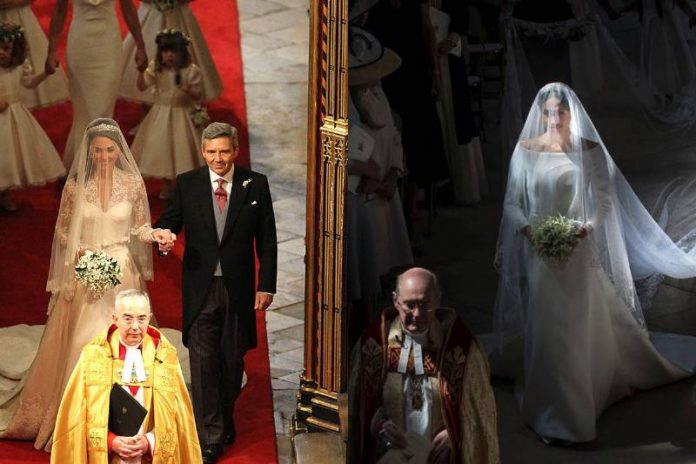 Within the last several years, we’ve been lucky enough to experience two weddings of the British royal family. Kate Middleton and Prince William said “I do” in 2011. Then Prince Harry and Meghan Markle became husband and wife in 2018. The weddings celebrating their unions had some key similarities but overall were quite different. After all, William and Kate will likely become King and Queen Consort one day, while Harry and Meghan have a less “royally traditional” relationship. Here are some differences you may have missed between the two lavish weddings. Did any of these differences give a clue that Harry and Meghan might step away from their official duties as royals? You decide.

It’s hard to fathom the amount of pressure on Kate Middleton and Meghan Markle as they each walked down the aisle on their big days with the entire world watching. The Duchess of Cambridge was accompanied by her father, Michael Middleton, on her big day.

Unfortunately, the Duchess of Sussex’s father was experiencing health issues during the month of her wedding date, preventing him from traveling to London for the big event. Meghan walked down the aisle solo before being met by Prince Charles halfway.