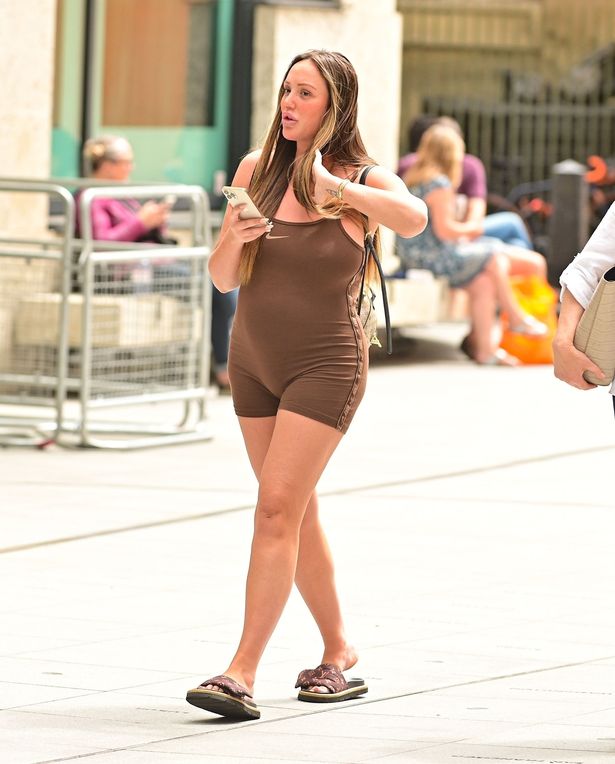 Charlotte Crosby showed off her blossoming baby bump in a brown Nike romper as she headed to a work meeting in London on Friday.

The reality star, 32, is currently expecting her first child with boyfriend Jake Ankers and has been keeping fans updated on her pregnancy, including by live-streaming her gender reveal party.

Charlotte was seen heading to the BBC’s Broadcasting House with her mother Letitia Crosby, following the news that she’s set to star in a documentary on BBC Three.

The pregnant reality star made the most of the sunshine as she wore a brown sporty romper and a pair of Louis Vuitton sandals as she walked through the streets of central London.

It comes after Charlotte recently confirmed she’ll be starring in a new series about her journey into motherhood.

The former Geordie Shore star has been making a reality series in her home city of Sunderland, where she’ll be seen running her business while preparing for motherhood with boyfriend Jake.

The star recently announced the sex of her baby during a rooftop party which she live streamed to Instagram.

Now fans will be able to get an even closer look at the star’s life and pre-motherhood journey in the new series called Charlotte in Sunderland, which is set to air on BBC Three.

Bosses behind the 10-part series say it will provide an “honest and surprising lens on the multi-faceted world of Charlotte”.

“I am beyond excited to be bringing my crazy life, my business ventures, much loved family, future hubby and my precious bump to the BBC,” she told the Sun.

Fans will see Charlotte prepare for life as a new mum surrounded by family and friends and will also be a fly on the wall as boyfriend Jake moves in with her as they prepare to become parents.

The news comes after Charlotte announced that her and Jake are expecting a baby girl.