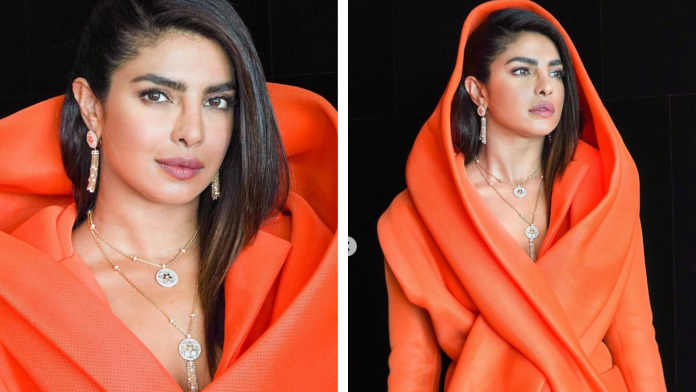 As part of her newly appointed role as Bulgari’s global ambassador, the actress launched the Italian brand’s new collection, Jannah, for luxury jewellery whilst in Dubai.

On Instagram, Chopra Jonas shared a carousel post of two shots modelling the collection and a picture with Bulgari CEO, Jean-Christophe Babin and Jewellery Creative Director, Lucia Silvestri, to announce the launch.

The ambassador captioned the post, “In August this year, Bulgari named Priyanka Chopra Jonas its global ambassador for luxury jewellery. With the new title, Chopra Jonas  supporting Bulgari brand’s global amplification focusing on themes such as diversity and inclusion and women empowerment.

She added, “It was such an honor to launch the Jannah collection today. It’s incredible labor of love created by two passionate, powerful women, @lucia_silvestri and Her Highness Sheikha Fatima Bint Hazza Al Nahyan, both of whom I admire tremendously. This collection is an homage to heritage, culture and a perfect amalgamation of the east and the west.

The actress concluded, “I also have to give a special shout out to #MohamedBenchellal. Congratulations on winning the vogue fashion prize as well as the fashion trust Arabia award.

“Sustainable fashion is the need of the hour and thank you @luxurylaw for recognising incredible talent from the world for me.”

In September, Bulgari and its global brand ambassador also announced the launch of an exclusive product for India, the mangalsutra.

In a description published by Vogue, the necklace has a “central diamond pendant flanked by smaller discs of black onyx”, all encased in the “double-logo gold circles” that characterise the ‘Bulgari Bulgari’ and ‘B.zero1’ lines, together suspended from a chain dotted with black onyx beads.

On its launch, the actor, producer and global entertainer explained that the beauty of the piece lies in its blend of traditional and contemporary elements—it can be worn with a T-shirt and jeans or even with a sari.