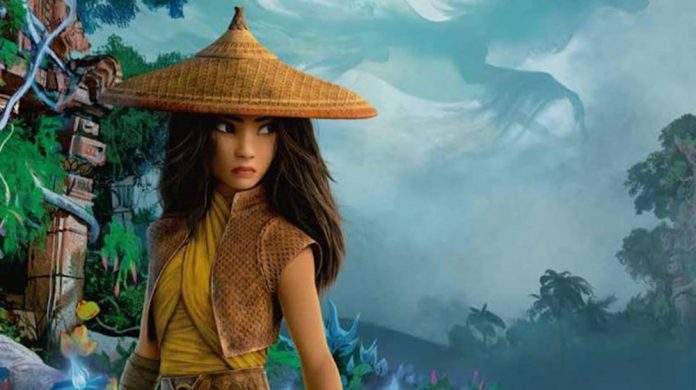 Walt Disney Animation Studios has shared the first teaser for their 59th feature film Raya and the Last Dragon.

The film stars Kelly Marie Tran as Raya – a warrior princess on a quest to save the last dragon, Sisu (Awkwafina), to salvage the realm in which she resides. But there’s more…

“Long ago, in the fantasy world of Kumandra, humans and dragons lived together in harmony. But when sinister monsters known as the Druun threatened the land, the dragons sacrificed themselves to save humanity. Now, 500 years later, those same monsters have returned and it’s up to a lone warrior, Raya, to track down the last dragon in order to finally stop the Druun for good. However, along her journey, she’ll learn that it’ll take more than dragon magic to save the world — it’s going to take trust as well.” (Walt Disney Animation Studios).

Raya and the Last Dragon will be the studio’s first film inspired by Southeast Asia culture. The teaser introduces Raya, gearing up as she prepares for an adventure across the realm of Kumandra with her animal sidekick Tuk Tuk, in search of the last dragon.

Yesterday was the first time the studio revealed Raya’s face albeit with her head bowed — since sharing the news of their upcoming Southeast Asia inspired feature-length earlier this year.

They shared this poster against a backdrop of audible rainfall ahead of its teaser release.

The film is set in a fictional fantasy land called Kumandra, inspired by Southeast Asian cultures from Thailand, Vietnam, Cambodia, Myanmar, Malaysia, Indonesia, the Philippines, and Laos. For their in-depth research, the production team traveled to Laos, Cambodia, Thailand, Vietnam and Indonesia.

Raya and the Last Dragon is written by Adele Lim (Crazy Rich Asians) and Qui Nguyen. It is directed by Don Hall (Big Hero 6), Carlos Lopez Estrada (Blindspotting), Paul Briggs (Zootopia) and John Ripa. And is slated for release on 12 March 2021.