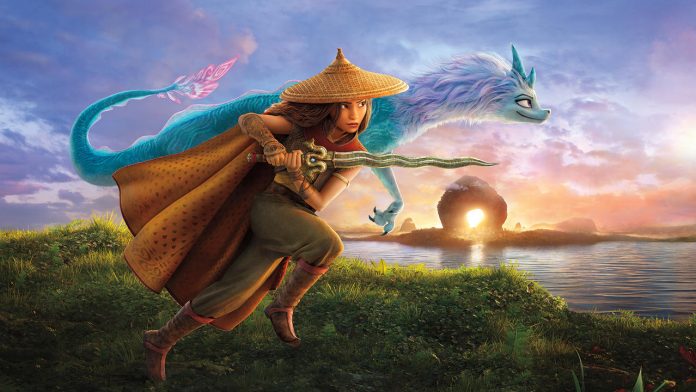 Kelly Marie Tran (Raya) and Awkwafina (Sisu) double as a dynamic duo in a swashbuckling quest to restore their divided land — in Disney’s first Southeast Asian inspired film that offers a masterclass in technical animation but little in story development.

The film takes us into the fantasy world of Kumandra where long ago, humans and dragons comfortably co-existed. But when sinister monsters known as the Druun (an amorphous plague), threatened the virtue of the land, the dragons had to sacrifice themselves to protect the humans from being turned to stone.

500 years later and those same viral monsters have returned, so it is up to lone warrior Raya, who grows up to become Guardian of the Dragon Gem (broken remnants of the dragons that once existed), to locate the legendary last dragon to restore the fractured land and its divided people.

If Contagion was the film that saw life imitating art last year in the worst way, leave it to Raya and the Last Dragon to do the same, but in the best way. Disney have given us a lesson in navigating fragility and solidarity. Nobody, let alone the Disney Studios, could’ve predicted this pandemic, but the message that they’ve gifted to viewers and indeed the world, is, despite the existential crisis we’re in, the only way we can restore harmony again is through trust.

And that is the moral thread that runs through the fabric of the film, and achieves it through a though, inevitable, all important scene in the final act. And it fills you with a feeling you should probably hold on to, because sure enough, we’ll all have to let our guard down again so that unity can take precedent over this pandemic.

Social commentary aside, visually, the film is a masterclass in technical animation. Narratively, the story works in theory, but in practice comes across hurried and haphazard. Visually, you won’t have seen animation like it. It feels like the visual storytelling was executed through a VR headset. It certainly imitates first person player tropes of a video game, because of the intricate angles and swift camera movements, which works well for this action-adventure-drama, or Disney’s version of Indiana Jones meets Apocalypse Now with lashings of Kill Bill.

It’s an immersive experience, where everything becomes so tactile you’re tempted to reach out and skim the surface of the water or feel the delicate fur on the dragons. The world we’re in forms the shape of a dragon — comprised of five lands: Heart (Raya’s home), Fang, Spine, Talon and Tail, each of which has a distinct aesthetic made up of parched deserts, niveous bamboo forests, floating markets, and canal-shielded cities.

When Raya journeys to these lands, it does feels like she’s just unlocked the next level to the another realm after completing a challenge (or collecting a piece of broken Dragon Gem) which again mirrors fantasy gaming tropes.

Narratively, because it is so hastened, unfortunately it loses the richness of the history of Kumandra it’s so obviously steeped in so we’re bereft of details. And though the backstory is told through a patchwork montage, questions as to why this is happening still remain. Not entirely a negative, as it can only pave the way for a spin-off in the form series maybe. It also has the tendency to be over-explanatory, when the visual story telling could have led us through the developments tacitly.

Howard’s score however works well to elevate the film’s visuals with its authentic culturally inspired sounds — in the form of gongs, drums, flutes and lutes. They all work to serve both high anxiety action sequences, and the more tranquil, ethereal scenes.

Tran who voices Raya strikes a perfect balance between vulnerability and ferocity when needed, especially the martial arts sequences. And in a poignant dialogue that would summarise the story in a single moment, Raya insists, “the world’s broken, you can’t trust anyone” to which Drago Sisu counsels, “maybe it’s broken because you don’t trust anyone.” Here, Awkafina, who voices Sisu demonstrates her flair for injecting a scene with the overriding optimism she’s become affectionately associated with, not least comic relief.

It is a film that would have been better experienced on the silver screen because of the visual spectacle but since most of us can’t, the best thing we can take away from it is the message more than the story – and that is just trust.

Raya and the Last Dragon is available to stream now on Disney+ with Premier Access.

Exclusive: Interview with Priyanka Chopra on ‘The Matrix Resurrections’