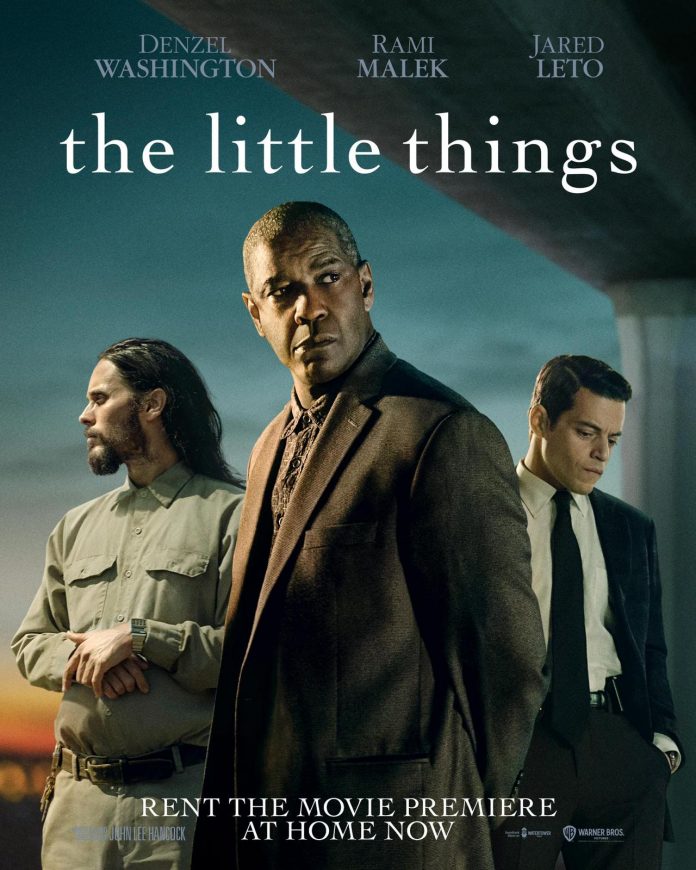 When Kern County Deputy Sheriff Joe “Deke” Deacon (Washington) is deployed to L.A. for what should have been a seamless evidence-gathering assignment, he becomes embroiled in a hunt for a killer who is terrorising the city.

The crime thriller, directed by John Lee Hancock (The Blind Side, Saving Mr. Banks) is unabashedly redolent of the kind of 90s psychological crime thrillers in which The Little Things is set.

It has traces Se7en and echoes of Silence of the Lambs — films in which were distinguished for the decade, so you can’t help feel a little desensitised to the excruciating angst that Hancock is trying to create, or recreate.

But what sets The Little Things apart from its predecessors is precisely that — the little things.

And Deke (Washington) is no stranger to these ’things’. We learn this when he counsels a rapidly faltering Sgt. Jim Baxter (Malek), who up until now has done everything by the numbers to solve an ongoing murder investigation.

It’s a slow burner at times, but perhaps justified and one that can only sit well with an audience with a lot of patience. If there’s an appreciation for finer details, then this protracted plot will pander to it unapologetically.

“It’s never over”, after all, as Baxter soon realises.

The project was 30 years in the making and had various possible directors attached over the years, including Steven Spielberg and Clint Eastwood, until Hancock happily took the helm himself.

In a December interview with Deadline, Hancock said: “It’s an odd, weird time and I can’t wait to go back to the movie theatres and make them for movie theatres because there is simply no high like that. That said, these are trying circumstances we are all in and I’ve tried my best to be Zen about it.”

Malek said Jim’s obsession, which distances him from his wife and young children – is also a tale for our times.

“This year probably has taught us a lot about that. We get so focused on certain things. And so narrow-minded in a certain tunnel vision about what has to be achieved in life and what we have to do. And we kind of perhaps start to neglect the most important things.”

Leto revealed that he went abroad on a silent retreat at the beginning of the pandemic, “when there were only 150 cases in America. And when I came back, there was an emergency shutdown”.

“But I had learned how to meditate… it was really fortunate that I had that opportunity.”

Washington, however has a more profound message about the lessons to be learned from the global pandemic.

“I’m not a religious man. I’m a spiritual man. In the Old Testament, in the Exodus, God sent the plague down and sent every man, woman and child back to their tent. And I think that’s what’s happened to the world in an instant. We’ve all been sent back to our tent. We have to deal with ourselves, our families, our loved ones, we have to reassess who we are, how did we get here?

“And I believe that as we go back outside, if we don’t look out and take better care, and treat our fellow men and women as we would want to be treated, we will all be destroyed.”

The Little Things is now available to rent at home on Premium Video on Demand.