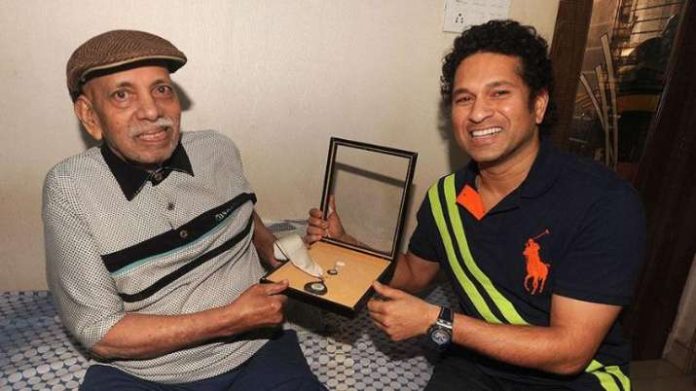 Sachin Tendulkar has paid tribute to the late Ramakant Achrekar — in remembrance of his childhood cricket coach.

Ramakant Achrekar served as a pivotal mentor in Sachin Tendulkar’s early life, who would go on to shape the cricketer’s successful career in the decades that followed.

The late coach guided Tendulkar who was an aspiring young player during his childhood, by helping him realise his potential at an early age when the ‘Master Blaster’ decided to pursue cricket.

To honour the late coach on his second death anniversary (2 January), Tendulkar penned a personal tribute on Twitter, in which he expressed gratitude for his ‘Guru’.

Without him, many aspects of my life would have remained unexplored. Forever grateful to my Guru Achrekar Sir – he taught us a lot more than one can describe. The pain of losing him is immeasurable but I know he is always looking after all of us from his heavenly abode. pic.twitter.com/FqyFsr2KD7

Taking to Twitter in July 2021, Tendulkar posted a video on the occasion of Guru Purnima where he can be seen placing a rose in front of his late coach’s photo frame in which he offers prayers to his mentor. The video concludes with the 2011 World Cup winner seeking Mr Achrekar’s blessings.

Visited Achrekar Sir’s home today to pay my respects to him on #GuruPurnima. All memories came rushing back. Can’t thank him enough for his contribution in my life. pic.twitter.com/FuHyNCA3aA

According to Republic World, Mr Achrekar served as an inspiration for the Tendulkar’s throughout his career. Even on the day of his retirement from the game on 16 November in 2013, the cricket icon remembered his mentor while giving his farewell speech.

The veteran coach died age 87 in January 2019 at his Shivaji Park residence in Dadar, Mumbai.