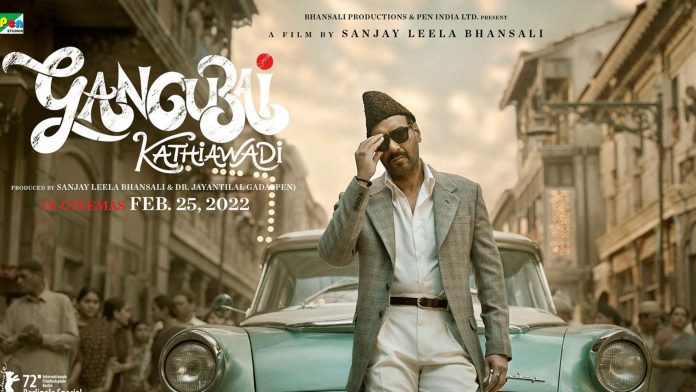 The filmmakers have revealed Bollywood star, Ajay Devgn in his screen avatar in the film for the first time, alongside a new character depiction by Alia Bhatt as the eponymous lead.

Synonymous with bringing iconic and timeless characters to life on screen in each of his films, the latest images to be released by the filmmaker continue to build the buzz ahead of the film’s World Premiere at the 72nd Berlin International Film Festival on 16th February, followed thereafter by its worldwide, theatrical release on 25 February.

Depicted in the filmmaker’s inimitable style, the screen avatars are all set to join the hall of fame of global cinema’s most iconic characters alongside many of the multi award-winning director’s earlier filmic creations.

Gangubai Kathiawadi has been selected to be screened as part of Berlinale Special, a segment of the film festival that is dedicated to showcasing exemplary cinema from across the globe. This year’s selections are films that have been shot during the pandemic. As Sanjay Leela Bhansali completed the film against the backdrop of pandemic challenges in his milestone, 25th anniversary year in the world of cinema, his tenth film, Gangubai Kathiawadi, has been of particular significance.

“This time with a film that joins the usual craft in shaping camera movement and the choreography of bodies with a subject that is socially relevant, not only in India. From the very beginning we were taken by the story of Gangubai, an exceptional woman dragged into exceptional circumstances,” Chatrian added.

Gangubai Kathiawadi is set to release theatrically on 25 February, 2022.