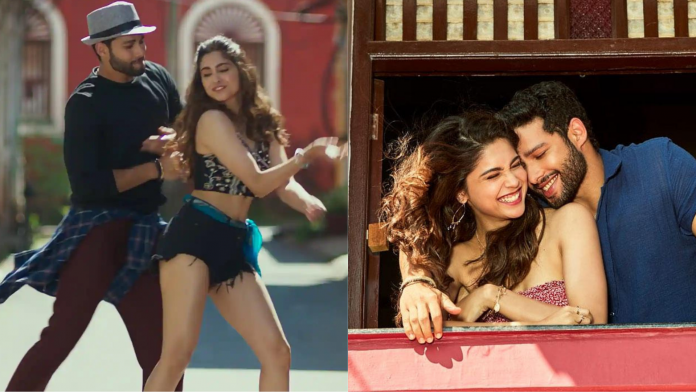 In a career first, the pair learnt Salsa for the film’s first romantic song, Luv Ju.

Speaking about the song in a statement, Sharvari said: Luv Ju is the first romantic song of both Sid and my career so we were naturally super excited about the process of filming this lovely song. The thing that stands out about this song is that while it’s a romantic song it is also super chill, young, cool, and definitely a song for long drives. It’s got an amazing vibe and I remember the whole crew used to say Luv Ju instead of goodbye after the shoot was over every day. Luv Ju is definitely going to be the newest coolest slang in town because it’s so catchy!”

She added: “We also learnt a mix of bachata and salsa for a portion of this song. It was for the first time we were doing such a complex dance form and had to pull off some extremely fast-paced choreography. Salsa is about 50-50 % partnership & while learning it, Sid and I struggled so much in finding that balance but when we got the hang of it, we could pull it off in our sleep. We practiced non-stop because we wanted to get the choreography bang on! It was such an honour to be choreographed by the genius Vaibhavi Merchant Ma’am. She believed we could pull off such an intense salsa choreography so we had to put in extra efforts to prove ma’am right!”

Siddhant said, “In Punjabi, one often says Luv Ju instead of Love You. There is a vibe and style in how the youth says Luv Ju and this song captures this beautifully. It’s an effortless, feel-good song that shows how the new Bunty and Babli let their hair down after a grand heist. They are in love, they are extremely attracted to each other. So, the song captures their flirtatious chemistry.”

He added: “It’s my first romantic song! So, I remember I was really excited to learn salsa from Vaibhavi Merchant! I was going to shoot a romantic song for the first time in my career and I gave it my all and practiced for hours! I’m now addicted to listening to Luv Ju and I hope that the youth of the country will say Luv Ju to each other with this song once it drops!”

An entirely rebooted franchise, Bunty Aur Babli 2 features Rani Mukerji and Saif Ali Khan as the original Bunty and Babli alongside newcomers Siddhant Chaturvedi and Sharvari as the new Bunty and Babli.

This rib-tickling comedy will pit two sets of con artists, from different generations, against each other as they try to prove who is the better con couple. Yash Raj Films’ Bunty Aur Babli 2 has been directed by Varun V. Sharma, who has worked as an Assistant Director in YRF’s biggest blockbusters Sultan and Tiger Zinda Hai.