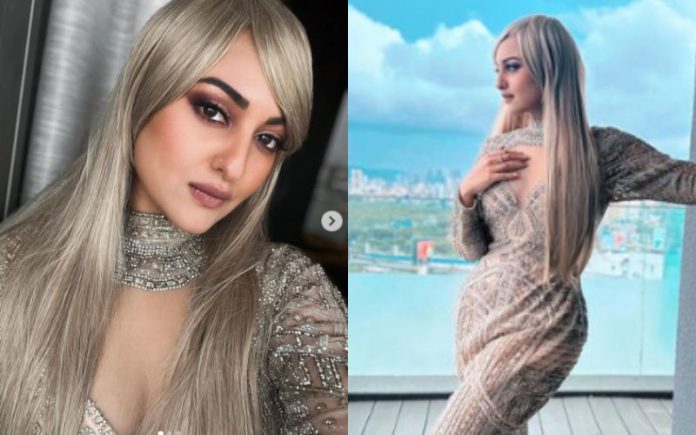 Bollywood’s Dabangg girl Sonakshi Sinha loves to experiment with her looks. She recently shared her new blonde look which she donned for a photo shoot with fans and followers on social media. The actress posted a couple of her stunning photos wearing a blonde wig while turning into a muse for a designer for the shoot. While many praised Sonakshi for her new and unusual avatar, a few other users brutally trolled the Akira actress calling her ‘buddi.’

Taking to her Instagram handle, Sinha shared her photos wherein she wore a heavily embroidered silver-colored gown, blonde wig, and matching jewelry. The actress had her makeup game on point and looked every inch of the diva she is. Alongside the photos, Sonakshi wrote, “Not a new look… but its a LOOK! Special shout-out to my bomb hair-makeup-styling team for making sure our little experiments turn out TOP!.” In the first two shots, the Rowdy Rathore actress posed for a selfie showing off her utter beauty. In the next picture, she oozed oomph factor as she posed with style at the backdrop of a picturesque view.

However, several users were left unimpressed by Sonakshi’s stylish blonde look and trolled her for the same. Reacting to the post, one troll commented, “Ye buddhi dadi kaun hai Mam??.” Another wrote, “Not looking good.” One comment read, “worst look, Bekar lagche.”
Meanwhile, the 35-year-old actress recently launched her nail brand ‘Soezi’ which features a wide range of press-on nails. While launching her brand, Sonakshi said in a Facebook post, “Soezi was born out of a desire to make sure that glamour is accessible to every person in the country.” On the professional front, the actress will next be seen in the upcoming film ‘Double XL’ with Huma Qureshi. She also has ‘Dahaad’ with Vijay Varma, ‘Bulbul Tarang’ with Raj Babbar and Tahir Raj Bhasin, and ‘Kakuda’ co-starring Riteish Deshmukh in the pipeline.