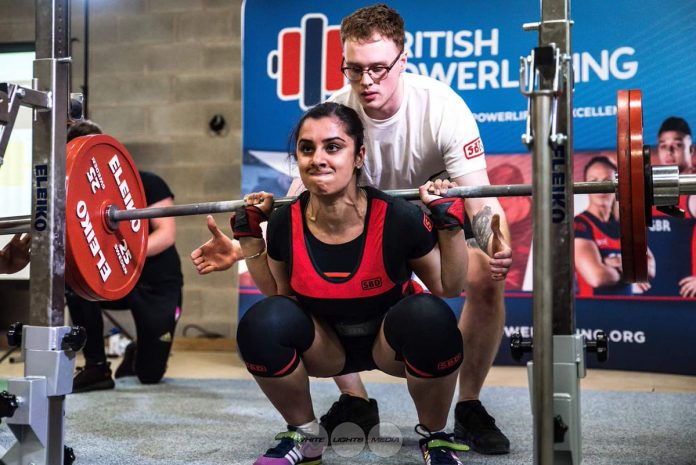 Karenjeet Kaur Bains still remembers walking into the arena for her first-ever powerlifting competition when she was 17 years old. Flanked by her “quite strong-looking” twin brothers, the referee approached them and asked, “Are you two looking to compete today?”

Her brothers set the record straight: “No, it’s our sister.”

Even though it was her first meet and she felt like a “P.E. kid” (meaning like her school’s physical education classes, where she didn’t have any special belts or equipment that more advanced powerlifters use), Karenjeet lifted really well. “They were really surprised by my raw strength,” she recalls.

The experience — defying expectations simply by showing off her sheer power — helped ignite her passion for the sport.

Now 24 years old and breaking into the senior circuit, Karenjeet is continuing to add to her already impressive record: she placed in the top 10 at the World and European Championships, claimed her first international title and became the 2019 Commonwealth Champion in the under 63-kilogram junior women’s class. Most recently, she placed in the top two at the British Senior Bench Press Championships. Her best lifts in competition include a 140 kg. squat, 82.5 kg. bench press and a 167.5 kg. deadlift.

But one of her proudest accomplishments in the sport is being the first British Sikh woman to represent Great Britain in an international powerlifting competition. “I’m very proud of my culture and my heritage,” she says. “It’s almost like I’m making a bit of a stand or a mark for other girls…I like to carry that on my shoulders to be an example. Particularly with strength sports I’ve noticed there are not many Indian girls. I feel like sometimes we’re overlooked. In my culture, we embrace the side of working hard, which I have taken to apply to not only my sporting side but academically, too.”

That drive to succeed is how Karenjeet achieved first-class honours in accounting from Durham University while also preparing for the World Powerlifting Championships. Crunching numbers, crushing records. It’s all in a day’s work.

Whenever Karenjeet competes, she makes sure to represent her heritage. “I insist on having my full name — Karenjeet Kaur Bains — because the middle name is quite distinctive of a Sikh person…I also wear a kara, a bangle, one of the five religious symbols you can wear as a Sikh person. I have rituals in my head when I’m on the platform and I’m lifting. It helps keep me focused if I think of God,” she explains.

Karenjeet doesn’t want to just send a message to Sikh women. She wants to show that any woman, no matter her background, can compete in powerlifting. She also encourages girls and young women to take up the sport through her growing Instagram account — and loves to offer training tips and advice to those who ask (so slide into her DMs if you’re thinking about getting into powerlifting!).

A former sprinter, Karenjeet competed in track and field events and started lifting to build strength. Athleticism runs in the Bains family — her coach and father Kuldip Singh Bains is a former bodybuilder and powerlifter himself, and her twin older brothers Parminder and Pardeep were national-level 400-metre hurdlers.

Both of her parents have strong athletic pedigrees — Manjit Kaur Bains’ eldest brother was a well-known champion wrestler. But growing up in India, Karenjeet’s mother never got the opportunity to practise a sport or complete her education.

Manjit’s family lived on a farm in rural Punjab, where, like most families, her brothers got more opportunities then she did. “My parents ensured to do the best they could for us as a family but it was always noticeable there was a slight difference between how myself and my sisters were treated compared to my brothers…The boys got the best education. They were free to go wherever they wanted to go. They studied as far as they wanted to study,” Manjit remembers. She and her sisters learned from hand-me-down books.

Manjit stopped going to school after year 10. It was too expensive and too dangerous to send a daughter to school far away from home, a decision Manjit says was “heartbreaking.” She was a bright student, learning much faster than other children and she knew she was capable of advancing further.

When she moved to the U.K. at 18 years old to get married, she hoped to get another opportunity to continue her studies — but motherhood and maintaining a household took up all of her time. Plus she was living in a country where she didn’t speak the language.

Once Karenjeet and her brothers were in school, Manjit started to learn with them and developed her English skills. When the children started playing football, Manjit was always there cheering them on and shouting out directions from the sidelines, no matter the weather.

Watching her children sparked an interest in pursuing athletics on her own. Kuldip trained in their home gym and Manjit would pick up heavy dumbbells — almost effortlessly — to test out the weight. Despite never training before, Manjit had natural raw strength. With “quite a bit of encouragement from Kuldip,” Manjit began to compete in other athletic competitions, too, like track and field. She also went back to school, completing qualifications in English.

Karenjeet loved watching her mother dominate Warwickshire track and field competitions. “It was really important for me to see,” she remembers. “I was 13 at the time. I was a keen sprinter. So the fact that I saw her win all of these medals, I was always very proud of her and it was made even more special knowing her background and the challenges she went through to fulfill part of her childhood dream. Seeing her standing on that podium gave me some kind of inspiration. Look at my mum, look at how far she’s gone.” She still has the newspaper clippings with the headline: “Super Mum Manjit’s Five Gold Medals.”

Karenjeet recognises how lucky she is to have parents who not only set an example for her but who are also always encouraging her academic and athletic pursuits. They never miss a competition, travelling around the world to watch their daughter rack up title after title.

She also enjoys being able to bond with her father over their shared passion for powerlifting. “It’s definitely a conversation starter,” she adds. Now her mother is joining in, starting to lift in the family’s gym. “One day I want her to compete with me. That would be awesome,” Karenjeet says.

When she’s not training, Karenjeet works as an accountant for KPMB in London and soon hopes to qualify as a chartered accountant. Before social distancing measures closed down most of the U.K., Karenjeet used to pound out three-hour training sessions in the gym on Tuesday and Thursday evenings after work. Now, she’s taking advantage of her family’s home gym and the daily coaching sessions with her father to emerge from lockdown with a greater competitive edge.

Some days she even runs into someone coming to lift while she’s there — her mother.