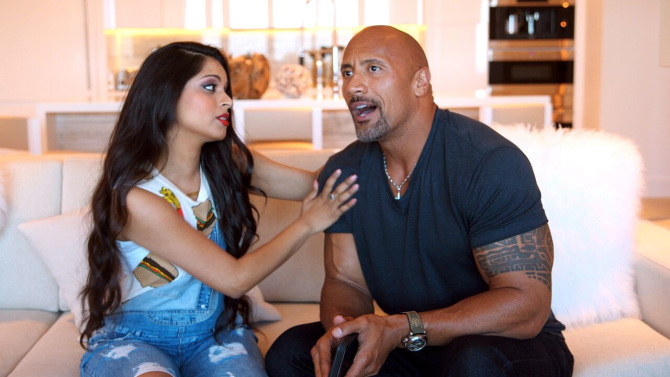 Lilly Singh has been a massively popular YouTube star and personality in recent times since opening her YouTube channel in 2010. She currently has over 9 million subscribers on YouTube. She has endeavoured out of YouTube through rapping, appearing in music videos and movies. Her own movie entitled: “A Trip to Unicorn Island” – in which she documents her worldwide tour. The documentary also features intakes from celebrities, friends, family and fans as well as clips of her on stage and performing.

Dwayne Johnson, currently reeling the success of his latest Hollywood blockbuster ‘Central Intelligence’ starring comedian Kevin Hart. Appeared in a recent collaboration video on Lilly’s YouTube page. In which Dwayne asked Lilly advice on how to be a successful YouTuber, with Lilly giving Dwayne general tips. Of course they would give her an advantage to fulfil her fan-girl needs. The second part to their collaboration was featured on Dwayne’s YouTube channel in which Lilly gave Dwayne a tour of ‘The YouTube Factory’, a secret factory where YouTube videos are filmed. The YouTube video also starred several other notable YouTubers including Gigi Gorgeous, Alex Wassabi, King Bach, Brittney Smith and many more.

The collaboration between Dwayne and Lilly has been highly entertaining and I hope the success of their recent collaboration opens the door for many more! Check out their videos below!