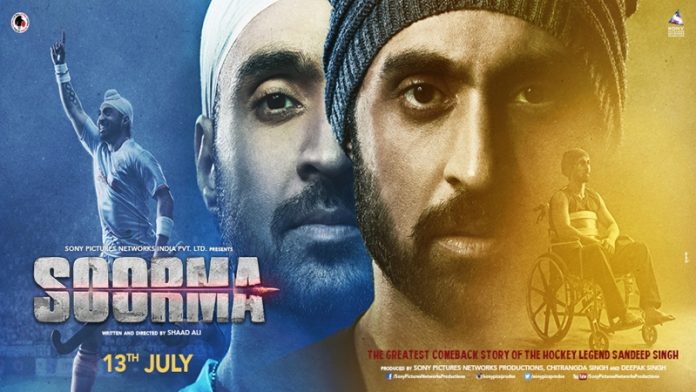 The movie is based on the ex-Indian Hockey captain Sandeep Singh, who became a worldwide famous Hockey player, to then suffering a bullet wound to making a huge comeback and becoming a Hockey legend. The story line is inspirational and will definitely be worth a watch.

In the trailer, we see Diljit portray Sandeep as he goes through the highs and low points of Sandeep’s life, and we see his passion and determination for the game shine through. We also see the Punjabi singer’s amazing body transformation in the nearly 3-minute trailer, where we can tell he has put in a lot of hard work to look the way he does.

Not only did Diljit have to prepare his body for the movie, but he had to pick up the skill of the game, where he spent six hours daily for a couple of days to learn the game from Sandeep himself, to make sure he played his part right on screen.

The trailer of ‘Soorma’ is an inspiring true story of the triumph of the human spirit, about a player, who made headlines for his unbelievable comeback after an unfortunate accident through sheer determination, hard work and unrelenting passion for the sport.

The film has been directed by Shaad Ali and is set to be released on the 13th July. In the meantime, check out the trailer below.