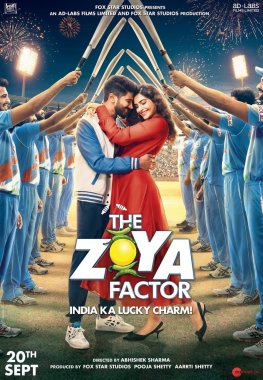 Based on Anuja Chauhan’s book, the Zoya Factor is a romantic drama film, starring lead characters played by Dulquer Salmaan and Sonam Kapoor. The plot follows an executive in an advertising agency named Zoya, who meets the Indian Cricket Team through her job, and becomes a lucky charm for the team during the 2011 Cricket World Cup.

The film has been directed by Abhishek Sharma, and produced by Fox Star Studios, Pooja Shetty and Aarrti Shetty. With the trailer having been released on the 27th August, it gave us a sneak preview into this fun, quirky tale!

Sonam Kapoor took to Instagram to share a series of Zoya Vlogs, sharing behind the scenes footage of the production, with the caption ‘Have no worries! Have no fear! Cause the lady luck’s now here! What happens when Zoya Solanki meets Team India’.

Both Dulquer Salmaan and Sonam Kapoor shared an exclusive video with us here at BritAsia TV, watch it below!

The Zoya Factor will be released in cinema’s worldwide on the 20th September, make sure to not miss this lucky charm, feel good film!