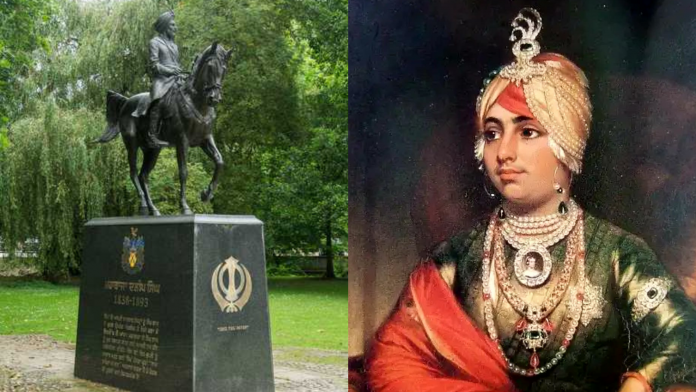 Green space on a river island in Thetford, Norfolk will be renamed to commemorate Duleep Singh — the last Maharajah of the Sikh Empire.

Duleep Singh was the last Maharajah of Punjab, and the first known Sikh to settle in Britain, in 1854. He lived at Elveden Hall, near Thetford, Norfolk, from 1861.

The area on the River Little Ouse in Thetford will be known as The Park of Maharajah Ranjit and Duleep Singh on Butten Island, the Local Democracy Reporting Service said.

Breckland District Council approved the name change at a cabinet meeting, according to the BBC.

Elveden Hall is at the centre of a large country estate and farm about four and a half miles (7km) down the A11 from Thetford in Suffolk.

Having been ousted by the British, the Maharajah settled in Britain in 1854 and later moved to Elveden.

“[His] second son Frederick was one of Thetford’s most prominent benefactors, giving the town’s its Ancient House as well as his personal collections.

“This connection continues today with Thetford remaining a prominent cultural site for the British Punjabi community and for Punjabi visitors from overseas.”

“They believe that this is a merger between the Sikh cultures, our cultures. We have an ideal position in Butten Island, where [two] rivers meet,” he said.

Duleep Singh became the first Sikh to settle in Britain at the age of eleven. He spent the first years of his life in the Punjab, but after the defeat of the Sikh army in 1847 the young prince was taken in guardianship by the British.

In 1849 Britain annexed the Punjab, allegedly in the name of Duleep Singh. However, Duleep gave up his sovereign rights and his property to the British, including the famous diamond known as the Koh-i-Noor, which is now part of the British Crown Jewels.

Duleep became a favourite of Queen Victoria and the aristocratic elite. In 1863 he bought the estate of Elveden, close to Thetford, where he pursued a leisured life including shooting and hunting over the 17,000 acre estate. The Prince of Wales also attended his hunting parties at Elveden.