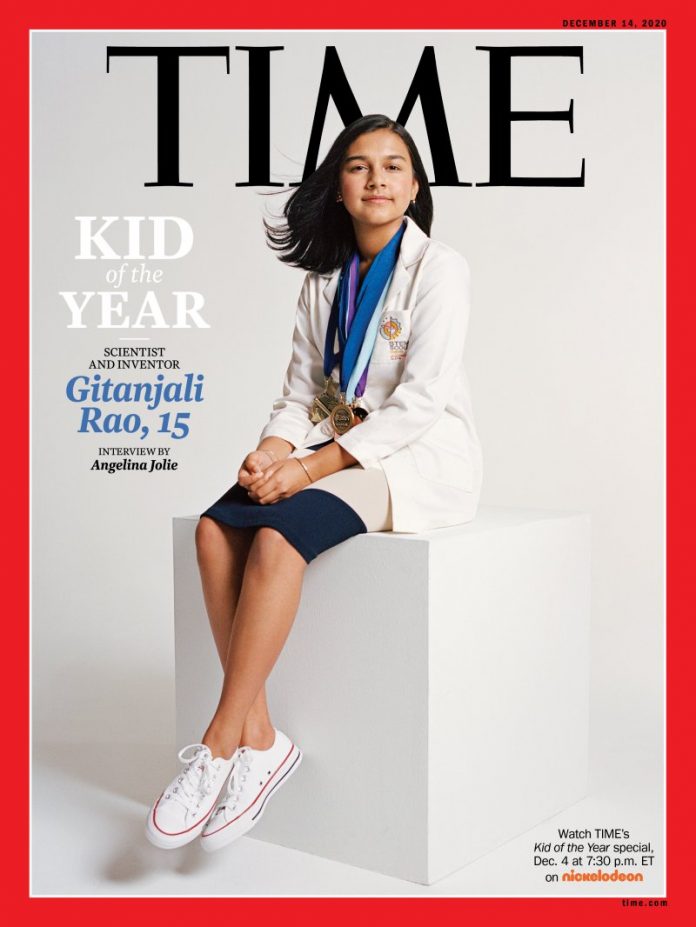 In a landmark first, TIME Magazine has revealed Gitanjali Rao, a 15-year-old scientist and inventor, its first-ever Kid of The Year 2020.

This year, in partnership with Nickelodeon, TIME recognises its first ever Kid of the Year in the U.S, a barometer for the rising leaders of America’s youngest generation.

To choose the most influential kids of 2020, TIME turned to social media and scoured school districts, for actions big and small. “Small steps can lead to big change,” said TIME for Kids editor Andrea Delbanco. “These are everyday kids making change in their communities in a fun and accessible—but very impactful—way.”

“Exceptional leadership” is what made 15-year-old scientist and inventor, Gitanjali Rao claim the title of Kid of the Year, among other finalists. Rao was one of five Kid of the Year finalists selected from a field of more than 5,000 Americans, aged 8 to 16 who have already achieved positive impact, in all capacities.

Rao earned the esteemed recognition by continually researching scientific tools – such as artificial intelligence and carbon nanotube sensor technology and applying them to problems she sees in everyday life, like cyberbullying and water contamination. She also shows other kids how to tap into their curiosity, aspiring to create a generation of innovators.

TIME made the announcement on social media and shared the cover for the culminating December issue of their magazine. They tweeted: “Introducing the first-ever Kid of the Year, Gitanjali Rao https://ti.me/36xydjU.”

In a Zoom interview hosted by Hollywood actor Angelina Jolie for TIME, Rao spoke about her work using technology to tackle issues ranging from contaminated drinking water to opioid addiction and cyberbullying, and about her mission to create a global community of young innovators to solve problems the world over.

During their video chat, Rao shared an inspiring message to other young people: don’t try to fix every problem, just focus on one that excites you. “If I can do it,” she said, “anybody can do it.”

When Jolie asked: “When did you know that science was a passion of yours?” Rao replied: “I feel like there wasn’t really one specific aha moment. I was always someone who wanted to put a smile on someone’s face. That was my everyday goal, just to make someone happy. And it soon turned into, How can we bring positivity and community to the place we live?

“And then when I was in second or third grade, I started thinking about how can we use science and technology to create social change. I was like 10 when I told my parents that I wanted to research carbon nanotube sensor technology at the Denver Water quality research lab, and my mom was like, “A what?”.

“It was just that changing factor of, you know this work is going to be in our generation’s hands pretty soon. So if no one else is gonna do it, I’m gonna do it.”

Read the full transcript of the interview here.

Each of this year’s five finalists will be designated a TIME for Kids Kid Reporter, given opportunities to contribute to TIME, and will receive a cash prize from ViacomCBS, Nickelodeon’s owner.

Meet Gitanjali Rao on Nickelodeon in Kid of the Year on 4 December via the website here.