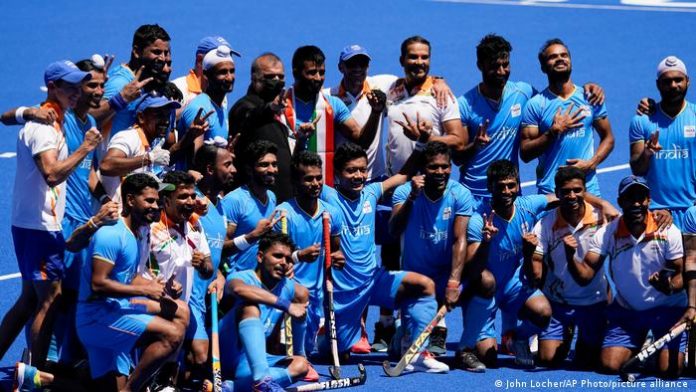 India has won its first medal in men’s field hockey after 41 years, having defeated Germany in the bronze medal match.

Trailing 3-1 in the second quarter, Hardik Singh and Harmanpreet Singh scored within two minutes of each other to even the score before halftime. Rupinder Pal Singh and Sirmanjeet Singh subsequently gave India a 5-3 lead in the third quarter.

It is the first time India, which has won eight Olympic gold medals in men’s field hockey, had won a medal in the sport since the 1980 Moscow Olympics.

Historic! A day that will be etched in the memory of every Indian.

Congratulations to our Men’s Hockey Team for bringing home the Bronze. With this feat, they have captured the imagination of the entire nation, especially our youth. India is proud of our Hockey team. 🏑

All of us right now 🇮🇳
Congratulations to the Indian Men’s Hockey team on this momentous victory! #ChakDeIndia | #Hockey | #Tokyo2020 | #Olympics pic.twitter.com/0e2wKZS7SX

India has won more Olympic medals in field hockey than any other sport. But prior to Tokyo, its 11 hockey medals were all won by men, and all before 1980. Today (Friday) will see India’s women’s field hockey team compete from their own bronze.