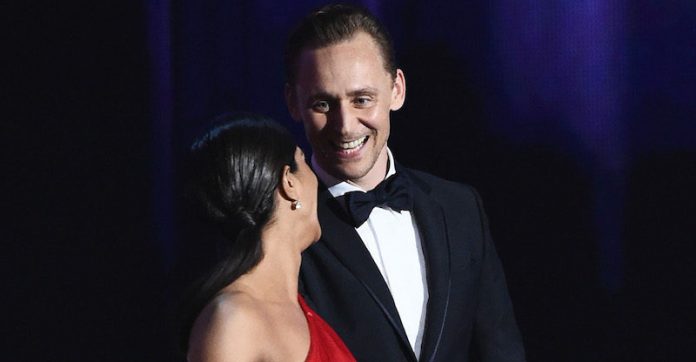 Weeks after publically announcing his public split with singer-songwriter Taylor Swift, actor Tom Hiddleston was spotted cosying up, holding hands and even trading his number with actress Priyanka Chopra.

The Quantico star and Tom Hiddleston flirted up a storm at Sunday’s Emmy Awards, where they walked hand-in-hand to present an award. However, it is rumoured that their flirty antics didn’t stop there. An onlooker backstage at the awards revealed: “He had his arm around her and held her close. Afterwards Tom and Priyanka talked closely and were holding hands — at one point for a few moments.”
“She fixed Tom’s bow-tie and then they kissed on both cheeks. Priyanka and Tom said goodbye and she told him she will see him later. They left the event about a minute after each other.”

According to E! News, multiple witnesses saw the pair both “openly flirting with each other” at an afterparty.

Potential new couple alert? Tom Hiddleston and Priyanka Chopra’s flirtation didn’t end with that adorable #Emmys twirl…the two were spotted bonding at an after party—watch #ENews tonight for all the details! (?: John Salangsang/Invision/AP)

Stay tuned to BritAsia TV on this blossoming romance as well as more music, sport and fashion news!