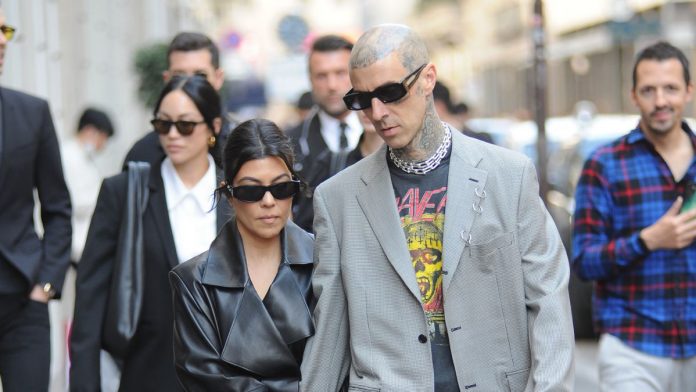 Travis Barker was taken to hospital by ambulance on Tuesday night after experience a health issue.

The Blink-182 drummer, 46, was spotted on a gurney being lifted from an ambulance before being taken to Los Angeles-based hospital Cedars Sinai Medical Center.

New wife Kourtney Kardashian, 43, was right by her man’s side as she walked alongside the paramedics wearing black sweat pants and a black hoody pulled over her head.

It’s not yet known what the issue was, but the musician cryptically tweeted “God save me”.

While some fans shared messages of concern with the star, others claimed it was actually referencing a Machine Gun Kelly song.

However, his daughter Alabama Barker also took to her Instagram Stories to say: “Please send your prayers.”

The incident follows POOSH founder Kourtney’s recent bout of Covid-19. It’s the second time she’s had the virus, but is said to have made a full recovery.

The unknown hospital visit comes just a month after the pair tied the knot in a lavish ceremony in Italy.

The duo exchanged vows in the luxury location of Portofino surrounded by close pals and most of their family, before continuing the celebrations over the course of a few days.

Following the shindig, Kourtney’s sister Kylie Jenner shared a behind-the-scenes snap from the ceremony with her followers.

In it she could be seen posing with her newlywed sis, older sibling Kendall Jenner and her daughter Stormi Webster.

The image showed the famous sibling trio puckering their lips with Stormi holding on to her aunt’s hips and giving a slight smile towards the camera.

Last week, Kourtney also came in for some criticism after allowing her seven-year-old son to get a mohawk hairstyle.

Reign, who Kourtney shares with Scott Disick, was pictured with his new do but some fans claimed he didn’t look happy with his new look and slammed the star for allowing the cut.

Despite the backlash, Kourtney was defended by other stars, including Mysterious Girl singer Peter Andre.