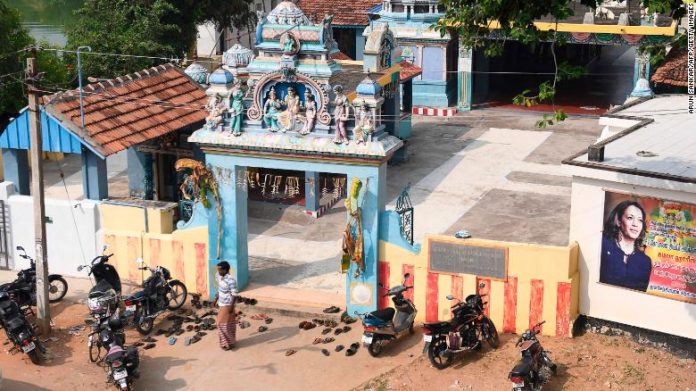 Residents of Kamala Harris’ ancestral Indian village have displayed well wishes for the US Vice President candidate ahead of Election Day.

Today, the United States of America will open the elections polls which will determine the next President of the country. Ahead of the polls, special prayers were held for the victory of Democratic Vice-Presidential nominee Kamala Harris, at a temple in her maternal grandfather’s ancestral village in Tamil Nadu.

The residents of Kamala Harris’s grandfather see the Democratic vice-presidential nominee as their own. A female villager said: “She is the daughter of the village’s soil,” the New York Times reported.

The village, Thulasendrapuram, has a significant connection to Ms. Harris — the home of maternal grandfather, PV Gopalan, who was born over a century ago. He was a civil servant who served in India and abroad. Throughout the year, Harris has shared the integral influence her grandfather had on her childhood.

The image captures a poster of Harris displayed on a temple in her ancestral village of Thulasendrapuram in India, where grandfather was born in.

Explaining the village’s connection with the family, Harris’s aunt Dr Sarala Gopalan told the media: “The Thulasendrapuram temple God is my father’s family deity. Whenever there is a marriage in the family or a special occasion, we visit the temple.”

The very temple has Harris’s name engraved besides alongside many donors, acknowledging her contribution of Rs5,000 in 2014. “We are happy and proud of her accomplishments. Kamala, who has her roots in this village, is in the race to become the Vice President of the United States,” the temple administrator said.

The New York Times added that on Tuesday, Thulasendrapuram, which is a near eight hours’ drive from the southern city of Chennai, orchestrated a special ceremony at the main temple to wish Ms. Harris good luck on Election Day.

There were men clad in white dhotis – a sarong-like wrap and women in bright saaris draped Hindu idols with flowers and chanted hymns.

As the election began to unfold in America, everyone was effervescent with confidence that Joseph R. Biden, the Democratic nominee for president, and indeed Ms. Harris, would win.