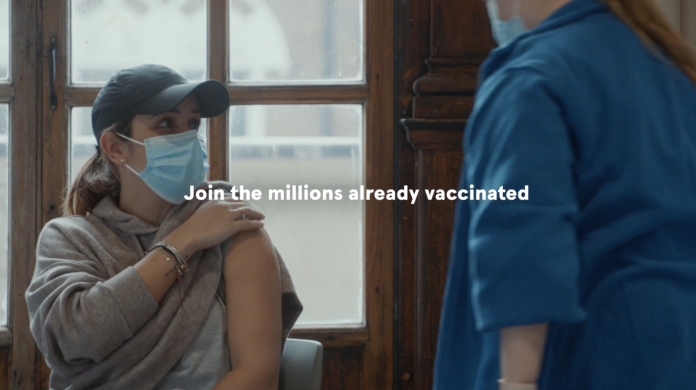 People aged 50 and under are being urged to get their COVID-19 vaccine when they are called forward, in a major new campaign being launched today.

The ‘every vaccination gives us hope’ campaign encourages those due to be offered vaccines in the second phase of the rollout to join the millions of people who have already received their jabs.

As part of the campaign, the vaccine programme’s first ever TV advert showcases some of the tens of thousands of health and care workers and volunteers involved in the rollout across the UK, as well as those who have received the vaccine. The advert will also run across radio, multicultural media, social media and out of home advertising like billboards in prominent locations across Manchester, Liverpool and London, including in Piccadilly Circus.

The campaign will predominantly be aimed at people under the age of 50 who will be offered their first dose, as well as the over 50s who are booked in for their second dose, to encourage vaccine uptake and highlight the significant role the vaccine is playing in preventing infections, hospitalisations and deaths.

“The UK vaccination programme will go down in history as a phenomenal national effort in the battle against COVID-19.

“Vaccines are helping us get back to doing the things we have missed – they protect you and those around you.

“This campaign is a remarkable and poignant reminder of everything we’ve been through as a country and everything we have to look forward to – as well as the tireless efforts of our volunteers, NHS heroes and the British people.

“Every vaccination gives us hope and I urge everyone to take up the offer of a vaccine when it comes, as we continue on the path back to normality.”

The new TV advert embodies the collective effort of everyone who has played a part in the largest vaccination programme in UK history – from the scientists and clinical trial participants, to NHS and care sector staff and volunteer stewards at vaccination sites – who have all worked tirelessly to protect those most at risk.

It features a poignant soundtrack recorded by songwriter and artist Shells, who was long-listed in Glastonbury’s Emerging Talent Competition to perform at the postponed 2021 Glastonbury Festival. The track, a cover of Dinah Washington’s ‘What a Difference a Day Makes’, will be released to the public in the coming weeks.

The campaign will also urge the public to get their facts about vaccines from trusted sources like NHS.UK and their GP so they can make informed and evidence-based decisions.

A number of organisations across a wide range of sectors such as hospitality, media, retail, manufacturing and construction will be supporting the campaign.

Royal Mail will apply a special postmark to stamped mail, which will run from 5 – 7 May, Google and YouTube will feature vaccine messaging on their channels, and LinkedIn will be providing free advertising space on its platform to help cascade a vaccine message to UK businesses.

“Our vaccination programme has so far saved thousands of lives, protecting our loved ones and bringing down infection rates to a point where we can see normality on the horizon.

“This new campaign showcases the fantastic work of health and care staff and volunteers across the country who have delivered this programme, as well as a handful of the millions who have received their vaccine so far.

“It’s vital as many people as possible book their vaccine when given the opportunity so we can continue to reduce the impact of this awful virus on our lives, and I urge everyone to play their part and get the jab.”

The independent Joint Committee on Vaccination and Immunisation (JCVI) has published its final advice for phase 2 of the COVID-19 vaccination programme, recommending an age-based approach with adults aged 18 to 49 prioritised in descending age order.

“The biggest and fastest vaccination programme in NHS history continues to reach new medically important milestones, as ten million people in England have now had their second jab, and two-thirds of people aged 45-50 have now quickly followed in the footsteps of millions of others to receive their vital first dose of protection.”

Recent data from Public Health England shows the vaccines are already having a significant impact in the UK in reducing hospitalisations and deaths, and saved more than 10,000 lives between December and March.

Data from the ONS and Oxford University shows that COVID-19 infections fell significantly by 65% after the first dose of the Oxford/AstraZeneca or Pfizer/BioNTech vaccines, rising further after the second dose.

The latest vaccine effectiveness data from PHE show that in those aged over 70, both the Pfizer/BioNTech and Oxford/AstraZeneca vaccines reduce the risk of getting symptomatic disease by around 60% after a single dose. This protection lasts for several weeks. In those aged over 80, protection against hospitalisation is around 80% and the Pfizer/BioNTech vaccine is 85% effective at stopping people aged over 80 dying from COVID-19.

Since the government and NHS published its vaccine uptake plan in February, the take up of vaccinations from people of all ethnic minority backgrounds has tripled, outpacing the national average increase across all ethnicities. Uptake among people from a Pakistani background is more than four times higher than it was in February and there has been a five-fold increase in people taking up the vaccine from a Bangladeshi background.

The government has already hit its target of offering everybody in cohorts 1 to 9 – those aged 50 and over, the clinically vulnerable and health and social care workers – a first dose of the vaccine by 15 April and is on track to offer a jab to all adults in the UK by the end of July.