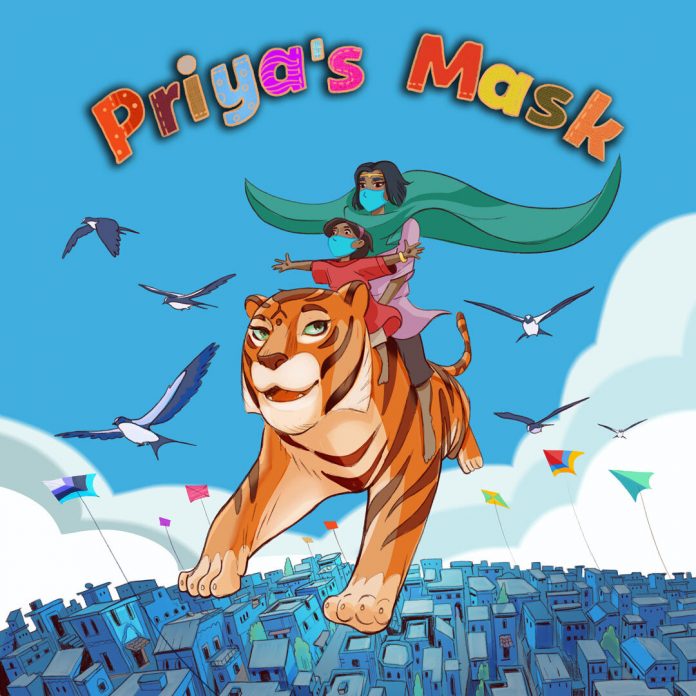 In Priya’s Mask, which premiers today, the comic crusader joins hands with Jiya, the ‘Burka Avenger’, a popular character from a Pakistani cartoon show, as the two go about trying to tackle the pandemic – and also the ‘infodemic’, a major proliferation in fictitious news surrounding the coronavirus.

With more than 9.4 million infections and 137,000 deaths, India has the second highest caseload globally. A strict nationwide lockdown that was imposed on 21 March delayed the spread temporarily but infections grew exponentially and ever more so.

A major challenge in India’s fight against Covid-19 has been the false and misleading information around the pandemic, which is often shared at lightning speed, reports the BBC.

They added since the first infections were reported in spring, millions of people with smartphones have received hundreds of messages each about ostensibly reliable cures and conspiracy theories on Covid’s origins.

Ram Devineni is the the Indian-American creator of the Priya comic series and the impetus for his latest animated short film was born out of an attempt to dispel the disinformation that has lead to a a nationwide disparity surrounding the health crisis.

“Through this campaign, we wanted to challenge misinformation, dispel fear, and support the health workers and others at the forefront of the fight against the virus,” Devineni told the BBC.

In the short film, Priya arrives riding the flying tigress Sahas (Hindi for courage), to battle “an invisible monster – a deadly virus unlike any we’ve seen before”.

As she flies into the city, she sees masses fleeing on foot – a reminder of the early days of the lockdown in India when tens of thousands of poor migrant workers walked for days to return home while factories, offices and transport shut down.

“There’s a quiet sense of fear. Everyone is hiding in their homes. It seems as though time has stopped,” she observes.

Delhi-based writer and theatre actress Shubhra Prakash, who wrote the script of Priya’s Mask, told the BBC she incorporated her personal experiences into the story.

“During the early weeks of the lockdown, we were not allowed to leave home at all. So I spent a lot of time in my balcony. My access to the world was quite restricted. We were all isolated and it was difficult for everyone. So when you see Meena, a little girl who’s one of the main characters in the story, standing alone in her balcony, daydreaming, that was also me.

“And when the lockdown began to ease and we could step out, a ‘new normal’ emerged. We had to wear masks and maintain social distancing,” she added.

Also in the comic, Priya partners with Jiya, the Burka Avenger, who’s fighting to protect her city Chutneyville against a villainous assault by Baba Kaboom, who plans to take it over by not wearing a mask and spreading the virus. But in the process, he contracts Covid and needs help from Priya and Jiya.

“The most important message it conveys is we have to look at the world with compassion and not give up on humanity. We can only conquer the virus if we work together,” Ms Prakash said.

Priya’s Mask is an important testament to the courage of women healthcare workers and will help educate people about the virus. An international array of actors and leaders lend their voices to this important film including Vidya Balan, Mrunal Thakur, Sairah Kabir and Rosanna Arquette.

Delve further into the superhero series here and follow Priya on her adventures.