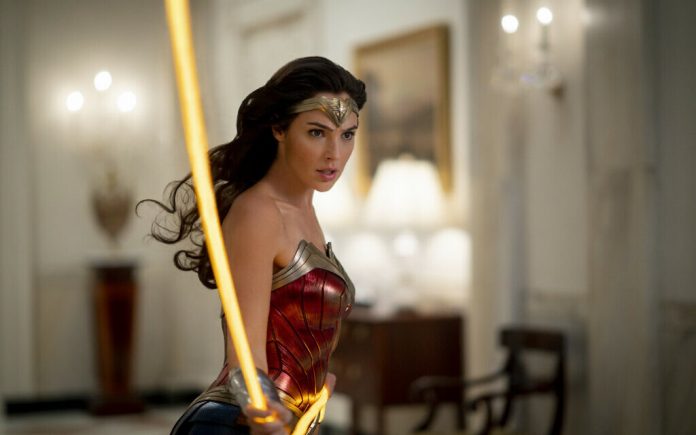 Wonder Woman returns in this superhero sequel with Wonder Woman 1984 — which takes us on an adventure through the not-too-distant past and our hero on a journey that spans the globe.

The second film in the franchise fast forwards to the 1980s where we find Wonder Woman soaring across the sky, donning wings of gold, and chasing a dream while in pursuit of two new formidable foes: Max Lord and the Cheetah.

In Wonder Woman 1984 (WW84), the fate of the world is once more on the line, and only Wonder Woman can save it. This new chapter in the Wonder Woman story finds Diana Prince living quietly among mortals in the vibrant, sleek 1980s—an era of excess driven by the pursuit of having it all. Though she’s come into her full powers, she maintains a low profile, curating ancient artefacts and only performing her superhero acts incognito.

Now, Diana will have to step directly into the spotlight and muster all her wisdom, strength and courage in order to save mankind from a world of its own making.

Gadot, who not only returns in the dual role of Diana Prince and Wonder Woman, but is among the producers on the film and said: “In Wonder Woman, Diana was learning what it meant to live alongside humans for the first time. In this film, she has a parallel arc with humanity in that, over time, she has learned to feel as they do.”

Gadot recalled when the idea for the story began to germinate for Jenkins. “Patty and I were still working on the first film, and we didn’t know how people were going to react yet. But we’re both big dreamers, and we thought if we were able to make another Wonder Woman film, it would have to be a completely different chapter in her life.”

Producer Charles Roven, who has a long history of exploring relatable themes through aspirational DC heroes, added for this particular story, they wanted it to take place far enough into her future that she would have evolved and matured. He said: “The 1980s was an interesting time to place someone timeless like Diana because there was a sense of invincibility, that your aspirations could be limitless.

“But with the passing of that many decades, she has also had to deal with things she never did in her young life as an immortal Amazon: the loss of people she loves.”

Jenkins directed WW84 from a screenplay she wrote with Geoff Johns & Dave Callaham, story by Jenkins & Johns, based on characters from DC and was created by William Moulton Marston.

Joining the director behind the scenes included director of photography Matthew Jensen, Oscar-nominated production designer Aline Bonetto (Amélie), and Oscar-winning costume designer Lindy Hemming Topsy- Turvy). The music is by Oscar-winning composer Hans Zimmer who provided the score for films such as Dunkirk, Gladiator and The Lion King.

Watch the official WW84 trailer below:

Wonder Woman 1984 is available to rent on Premium Video on Demand from 13 January.