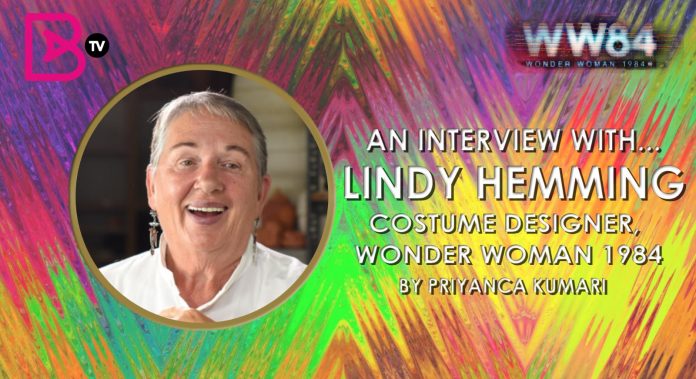 Following a screening of Wonder Woman 1984, BritAsia TV caught up with the film’s costume designer, Lindy Hemming, to discover the wonder behind the wardrobe.

Speaking from her home in Italy, Hemming revealed the inspiration for Gal Gadot’s Goddess dress, Chris Pine’s 80s makeover sequence and Kristen Wiig’s transformation from light to dark plus more.

If you haven’t seen the sequel, the year is now 1984. This time, Wonder Woman has two nemeses — Maxwell Lord (Pedro Pascal), a media businessman and TV infomercial celebrity. And Kristen Wiig as Barbara Ann Minerva, a.k.a Cheetah. In addition, Chris Pine makes a resurgence – in some capacity – as Steve Trevor.

First, let’s wander through the wardrobe…

Priyanca: Compliments firstly, to your sartorial sensibilities in bringing Wonder Woman and Co to life once again through your costume design.

Your work has appeared in movies as diverse as the Harry Potter, James Bond and Paddington franchises, but your notable designs include costumes for Christopher Nolan’s Dark Knight trilogy and of course Wonder Woman.

So when it comes to super hero and villain costumes, do you rely on the comic-book source material – that is, how do you define such iconic characters?

Lindy: The first thing is – if the character’s iconic, it is iconic for a reason and you’d be an absolute fool if you tried to iron out all of those things and start anew. So of course you pay special observance to how the character has been and I suppose you pay a lot of attention to [superheroes’] silhouette. How they appear – when someone looks at them – what the outer image generally is rather than the tiny details to start with.

I think your job as a designer is to update – bring to the next new load of people who are going to watch the character and instead of developing their super heroic character, make them more accessible to a new generation of people — that’s your job really, I think. It’s a business after all, isn’t it.

Priyanca: As the title of the film implies, we fast forward to 1984. What was your immediate reaction when you realised you’d be styling the civilians in one of the most popular decades in fashion.

Lindy: (Laughs) Well first of all, when we started it wasn’t really a hot decade — people didn’t seem to be so excited about the a lot of the clothes that the crowds wear. Everybody’s clothes were made to appear, either as a principal actor, all of their clothes were made – and anyone who was very close to the camera. But most of the extras, we bought from all over the bloomin’ world. We bought them online and also bought them when we were working in America so a lot of it was genuinely 80s clothes. It wasn’t very difficult, especially America, didn’t seem to have the sort of – craze.

Priyanca: Of all the characters, Kristen Wiig probably has the biggest transformation, especially visually. So what was your approach to designing her costumes to reflect the character arc. How do colours and textures make the difference?

Lindy: It was a gift to film because Wiig, Pascal and Pine all have these character arcs – especially Pascal and and Wiig. To me you need the story, or you talk to the director and talk to the actors and there is a requirement to sort of, make them transform of course and that is the costume designer’s job. So it’s a pleasure to be given that thing to do.

With Wiig especially, it’s very obvious because she goes from being slightly ditsy, intellectual slightly bookish woman to *her* version of 80 clothes, which is more like what the Mormon people wore in the 80s in America instead of high fashion so you get all of those awful colours – peppermint and raspberry.Then slowly, you’re invited, if you like, to say as she’s getting nastier and darker more disturbed – where do you go with that in *that* period. It’s more punky, you know? Go goth – go punky. So that’s what I did and I looked at Madonna quite a lot in that period — there’s a good dose of her in there.

Priyanca: Especially with the heavy makeup…

Lindy: Yeah and the bleached, scrunched hair. There’s a lot of stuff there we looked at Madonna for but when you look at Madonna earlier, when she’s still really young she actually doesn’t look that different to how KW looked at the beginning of the film. Except, Madonna wore it in a sassy way and KW wears it in a librarian way.

Lindy: Yes and in terms of colour, we were saying ‘she’s going to end up as Cheetah. So she starts off in colours and plays with colour initially and slowly, after she starts to realise her strength and feel more angry, which she obviously does because she beats people up, she becomes more punky and darker and becomes black. And once she’s gone to black, you’ve sort of got the message that she’s going to transform and all the time, trying to put in little bits of studs and animal prints in there – all sorts of little bits here and there to give you a nod that she was going to turn into Cheetah.

Note: Cheetah was created entirely in CGI, not a costume designed by Lindy.

Priyanca: It’s no spoiler alert that Chris Pine makes a resurgence in this film and in keeping with the latest 80s fashion trends, we’re treated to a makeover sequence that sees him try on all sorts of costume designs, not least the bum bag!I think I lost count of how many outfits he tried on…

Lindy: (Laughs) Now Patty wrote that scene as a kind of reprieve of what happens to Diana when she arrives in Selfridges in [Wonder Woman (2017)], where they try on lots of costumes in the changing rooms. So it was sort of WW/Diana’s revenge in a way, where now he’s having to try on all these clothes and get looked at – a sort of women’s revenge.

Priyanca: Which one was your favourite?

Lindy: My favourite one isn’t on screen I have to tell you, which is an awful shame. But he had a sort of midnight cowboy outfit and a denim sort of waistcoat. But I think the funniest one is the shiny nylon cargo pants with the red zip.

Priyanca: The red and black? Yes that’s the one I remember as well. It almost reminded me of the sequence in Toy Story 3 where Ken is in his Dream House trying on all these different outfits in [in front of Barbie], if you remember?…

(Lindy apologises for not having seen Toy Story 3) 💔💔💔.

Priyanca: Now let’s move to Gal Gadot. A stand out costume of course is the goddess dress worn at the gala. It’s certainly a nod to her Ancient Greek heritage…

Priyanca: But what was the additional inspiration for that gown?

Lindy: The additional inspiration for that gown is quite important in the sense that, it wasn’t to look like an evening dress, so much as all the other people at that horrible party, which is a sort of Reagan Era party where we’re wearing really vulgar, expensive and copied from designer dresses. And we didn’t want [Diana] to look like that because of the mood she’s in and the ideas she’s got about what’s going on, which she’s not very happy about, she’s not going to dress in an [revealing] evening dress.

The other thing is – you always have to think with her – is she wearing her Wonder Woman armour underneath her clothes (?) Because she certainly transforms into it quite often so we always kept her sleeves long and I think what we decided was that she wears almost like an evening ‘shirt waister’ and the same blouse pattern but with slightly bigger shoulders such as the navy blue blouse, together with the grey suit blouse that she wears wears in the museum.

So we made all of them, and for the [Goddess dress[ we made her a heavy crepe silk blouse with bigger shoulders, as a sort of homage to Claude Montana – who we thought was the right look. And then I saw a Chanel evening dress and so we made a wrap around skirt as the same fabric as the blouse so that became her evening wear and the way to make it look ‘evening-y’ was to split it and show her leg. It had the drape of a Grecian dress without being a Grecian dress, you know? So that’s how it was inspired.

Priyanca: It’s beautiful – definitely one of my favourite outfits.

Priyanca: It just suits her so well. And finally, the Wonder Woman costume! It’s certainly had some upgrades… The Red, Blue and Gold armour that is. Could you explain the changes.

Lindy: Patty wanted the Red/Blue/Gold armour to reflect the period because Diana is sort of a chameleon isn’t she – she moves from period to period and she’s always sophisticated and always classically dressed and always fits in. So Patty especially wanted the armour to change so that it was made of a more 80s glow and a lot more colour to it.

Lindy: And it isn’t to say if she was in a different time period in another film, we wouldn’t change it again – to fit into that period. Because that’s the chameleon nature of her and means she should fit in to wherever she lands.

Priyanca: She’s definitely the most adaptable superhero I think. But that’s not the only costume we see her in – there’s also a gold winged costume which was particularly striking…

Lindy: The thing about *that* costume is — its origins are, both Patty and I wanted her to have new armour. When you look into the comics in ‘Kingdom Come’ which is one of the most famous ones, she wears a golden armour and the back story of that armour is that is used to belong to her mother in ancient times. So you’ve got a reason for the golden armour there. The other reason being, we wanted her to have a stand out, sort of beautiful thing. And you get away with doing that in the 80s where you probably couldn’t in any other period.

I was looking at historic references to ancient armour and all of them were really clumsy and heavy and not very flattering so then we moved to wanting it to have the same pedigree as the armour she normally wears (Red/Blue/Gold) so I started looking at fashion. Alexander McQueen, Dior and Thierry Mugler.

Even Tom Ford has recently has done these marvellous golden armour for a catwalk where they put them over a dress or something. And so set about designing it from that — giving it a modern fashion-y feeling and at the same time trying to keep the Wonder Woman, heroic feeling to it.

Priyanca: Credit to the contributions you’ve made to the upgrade of Wonder Woman’s costume. I only look forward to the third film now to see further upgrades. Thank you.

Lindy: (Laughs) yes and I just have to say it was such a huge film to do – that I couldn’t possibly have done it without having the most fantastic team of people around me and wonderful assistants. I would never have got through it without them because it was a massive amount of work really.

Wonder Woman 1984 is now available to rent on Premium Video on Demand, including Sky Store, Amazon, Google Play and iTunes.